IAN FROM BIG BROTHER AS THE HULK 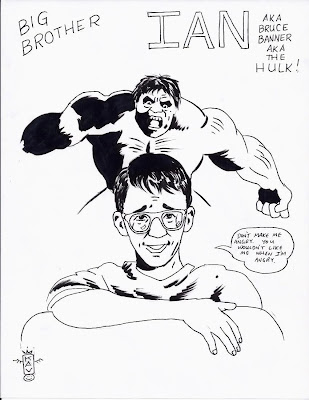 Champion City Comics artist and resident guru, A. 'Kav' Kaviraj, loves Big Brother, so every Thursday he sends me a drawing of a cast member as a superhero. This week he has selected Ian.

Kav explains his decision: "This week it's Ian as Bruce Banner/Hulk. Reason? HE LOOKS EXACTLY LIKE THE BRYAN HITCH VERSION OF BRUCE BANNER IN THE ULTIMATES!!!! Ian is flying under the radar but he made a tactical error when he wouldn't give Britanny a clear answer about the deal she proposed. A true genius would know to say whatever it takes-you can always stab someone in the back later"
- August 02, 2012