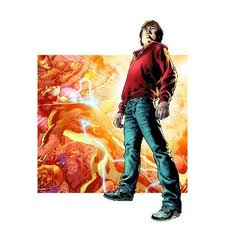 I hardly ever pick up an actual comic book, but I grabbed a copy of America's Got Powers #1 because Bryan Hitch was the artist. I read it and have to sadly proclaim it is lame. It's like someone watched The Hunger Games and thought they had a brilliant idea-'We'll do The Hunger Games, but with the X men!'.

So blah blah blah a crystal meteorite falls in Golden Gate Park and every mother in the radius instantly gives birth to a super (but not too bright) mutant. So one kid doesn't get super powers, so it's pretty darn predictable when we learn at the end of the comic that he's actually the most powerful one of all. Yawn. Saw that one coming.

The characterization is weak-these are standard characters we've seen plugged into many many superhero books over the years. Yawn.

Even the Bryan Hitch art failed to raise it to the level above something you would get on free comic book day. Of course there's the standard evil corporate types who run the hunger games. They also are your typical arrogant, cocky, corrupt, 100% evil standard character. Absolutely nothing worth reading about this book. Sorry guys.

A. Kaviraj is an artist and writer at Champion City Comics. His works include Dr Death vs The Vampire, Doctor Death vs The Zombie, and The End of Paradise.
- October 02, 2012