YOU DON'T TUG ON SUPERMAN'S CAPE

These are the many costumes of Superman. Let's take a look at the boy in blue during good times and bad.

I have been a Superman fan for as long as I can remember, and if there’s one thing I know in the comic world, it’s Superman. Through the years people have tried to change Superman's appearance. There’s the first incarnation of Superman, shown holding a car in the incredibly valued, (This comic sold for 2.16 Million) Issue #1 of Action Comics. The costumes have ranged from the red and blue electrical version, to the black and silver version, to the Multiverse version, etc. Slight tweaks have happened here and there, but the most notable was the shift from the shield design to the new diamond design. Also, the location of the cape has changed as it has gone from the neck, to the shoulders and dipping down his back. Superman has had multiple variations of colors and designs from a multitude of amazing artists, and multiple interpretations in an attempt to remake a simple design that has endeared because of the “Less is more” principle. In this first review of a series, I’d like to take the time to go through some of my favorite incarnations, as well as some of the most ridiculous. 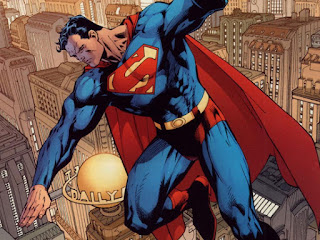 This is the costume that everyone knows and recognizes. This suit has been around for as long as I can remember. In my opinion the best reason this suit has endured for so long is because it is simple. For years people have associated capes with superheros, and it is unlikely you will find a kid who has not slapped on a bath towel around his neck and lept off the back of couches emulating the man of steel. I still do it and I regret nothing.

There will always be downsides regardless of how successful a concept is, and this suit has it’s share, of course the biggest fault, though minor in my humble opinion has been the underwear over the leotards. I can't fault people for this annoyance, but I understand it.

It only makes sense to have his underwear over his leotards because of my theory on childhood innocence. They couldn’t just draw a naked superman with underwear and a cape, it just wouldn’t work, but that’s not to say that kids don’t remember doing it in their youth. I’m not sure Freud could properly explain the need for having underwear on over your pants.

Nothing says awesome like a person who wears a cape. Superman has had a cape for almost as long as he’s had a cowlick on his head, and while the cape has never been as obnoxious as Spawns cape, it has been a cornerstone in the entire outfit. The costume just cannot work without the cape. In the New 52, Superman's cape has become something much more than a mere blanket that kept baby Kal comfy on his long ride to Earth. It’s also been the first thing to get messed up whenever Superman gets in a real fight. This has been explained prior to the New 52, as an thin aura that surrounds Superman, acting like a forcefield. This is why you always see his leotards more intact than his cape. The tattered ends of his cape do no share the same aura.

The one thing I really liked about this Superman was his empathy. This Superman showed the greatest qualities of humanity.. His strong sense of right and wrong, unyielding conviction, and the strength to make a difference. One of the most profound scenarios I saw Superman in was when he was talking to a preacher in the Brian Azzarello, and Jim Lee arc “For Tomorrow.”

The scene is a preacher speaking with Superman, who is noticeably looking down at him from the air, a visual highlighting Superman’s god-like status. The preacher asks Superman why with his powers, and intelligence why he will not cure cancer, a terminal diagnosis which the preacher has been diagnosed. Superman’s answer was melancholic. He wouldn’t do it because then people would think he was God.

To me, this adds a depth that the New 52 Superman is incredibly far from achieving.

In conclusion, this iconic costume has always been the failsafe DC Comics has used everytime their attempts to reincarnate it have failed. If the new 52 costume doesn’t cut it, I won’t be surprised at all to see him back in the 'Old Blue' suit again. 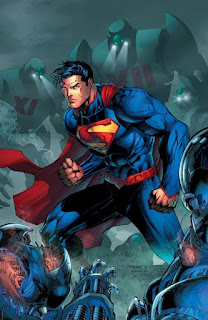 With the introduction of the New 52, which for the record is NOT a relaunch, we see an all new, up-to-date version of the iconic costume. The underwear has been removed, the belt has been replaced, and the costume has a more up-to-date feel. As a fan, I can say that I am very pleased with the suit.

It’s got a popped collar, better cuffs, nice boots, and it’s composed of a highly advanced Kryptonian nano armor. This armor can vanish when he needs it too, and appear when he needs it too. It’s pretty cool. The cape has been given a revamp, even though this title is not a relaunch, it’s like it’s a brand new cape. In the relaunch (not a relaunch) of Action Comics, in the New 52, we see that his cape is bulletproof, something he uses to his advantage as he still comes into his powers. I like that they given the same attributes to his costume that they have given to him. His cape would be nothing special under the influence of a red sun. Since he’s here on Earth, the fabric of his cape is somehow transformed under the rays of a yellow sun. This also give credit to his costume rarely seeing damage. So in those issues where we actually see damage done to Superman’s cape, it’s an obvious tell that whoever he’s up against is formidable.

When I read about the cape having similar mutations under the yellow sun, I wondered why they had never done that before. To me, it just made sense. Battle ready, and always scowling, this is a different Superman. His persona is meant to show a more alien aspect of him, something to really separate him from the “human” qualities the Boy Scout Superman showed. This new persona is less rational, he shows a temper. His attitude is more hardened, and black and white, as well a degree of arrogance. I believe this opens him up for multiple stories I hope to see exploited in the future.

When he’s not dressed up as Clark Kent, this Superman is a little more rough around the edges, tends to not take any crap, and I applaud the creative talents behind this revamping of one of my favorite hero’s.

An opportunity to really delve into the depths of this Superman has yet to really be revealed. It will be interesting to see where DC decides to go with Superman now that they have been able to virtually start over with him. I feel that with someone like Geoff Johns at the helm of the entire creative process of DC right now, we will not be disappointed.


Bret Kinsey is a contributing writer at Champion City Comics.