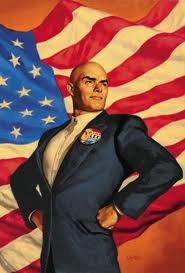 Welcome to part two of our series that deals with developing villains in your comic book script. If you missed part one then click here to read a few basic tips on developing your villain. Today's post is about goals.

A villain should have goals because they can not be evil simply because you need a villain in your story. What will set the villain apart from your hero in the goals department is that the villain will act in an unethical manner to obtain their goals. For example, they'll con someone or hurt someone or blow up a building. It is important to point out that the goals of the hero and villain should be believable. World domination is a goal that has been done again and again in comics, so it is important to have the reader believe this villain wants to dominate the world because that's their goal and not because they are assigned the role of the villain.