Anand 'Kav' Kaviraj found a great selection for his WTF?! comic book cover collection series. It is Strange Adventures #79, titled "Invaders From The Ice World" which was published in 1959 by DC Comics. The writer was Gardner Fox, the pencils were done by the great Carmine Infantino, and Gil Kane did the cover art.

Check out this horrible synopsis via the DC Wikia: Two Iowan boys build snowmen during an unseasonal snowfall, only to discover their creations missing the next morning. During the night, the snowmen had been possessed by energy beings from the planet Pluto and were now wreaking havoc in preparation for full-scale invasion. Darwin Jones of the DSI soon arrives on the scene and after a number of unsuccessful attempts to destroy the snowmen with heat, realizes that their paradoxical weakness is extreme cold. Earth is saved!

KAV'S THOUGHTS: Here we go with another silver age wtf cover-and just in time for the holidays! We see invaders from space who are advanced enough to build space ships but still have to wear battered old crappy hats. I have to wonder what the hell kind of evolution would ever possibly lead to critters like this. 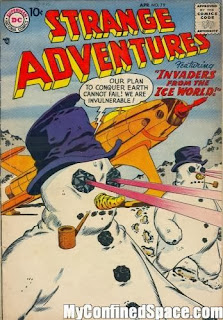