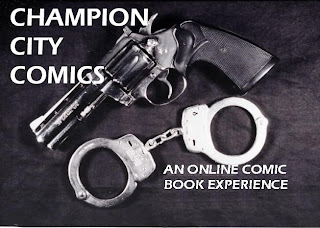 
October 2015 marks the six year anniversary of Champion City Comics. I've decided to write some rambling pieces about our history, which I hope you find to be somewhat informative and not too terribly boring.

My thought process for starting a webcomics page six years ago was something along the lines of "If you build it, they will come". Yes, I was pretty clueless when it came to the concept of webcomics, website development, site promoting, search engine optimization, and everything else affiliated with the undertaking. It would have been helpful if the 2009 version of me realized that putting something online does not mean it will easily be discovered by the billions of people surfing the web.

Researching webcomics at the time was very interesting because some comic creators were predicting the impending death of printed comics. Some are still awaiting that death. Webcomics were supposed to be the next phase of publication due to the rise in use of tablets and smartphones. Why pay for one overpriced comic when you could have access to an unlimited digital library for free or at the same cost? Also, webcomics did not impose a financial burden on creators, plus there was a great deal of freedom in the creative process.

Before I started Champion City Comics, I thought about printing my own comic books or graphic novels. There were a few eye-opening articles I read that put into perspective for me the hefty price tag for printing and distributing my own comics. A few thousand dollars was something I could not afford, so that's how I made my way to the digital wonderland that is webcomics. Remember, this was the pre-Kickstarter era of comics.

There were sites out there like Drunk Duck that hosted webcomics. What's nice about them is that you upload your webcomic pages, type in some information, and it's available for viewing. I decided against that at first because it would be a good idea to have a site solely dedicated to my work instead of being lost in a crowd of webcomic creators. Just because your webcomic is on a site like Drunk Duck doesn't mean it will have a hundred or a thousand instant hits. Those sites do have a history of becoming "good ol' boy networks" where you need to scratch some backs in order to get some views or get buried. Also, I had a few experiences with Drunk Duck where I could not find my posted comics. I'll write more on that later, ladies and gentlemen.

Politics and cliques didn't tickle my fancy, so that's how I ended up on Blogger. I knew some people that started blogs using Blogger, so that was my choice for hosting Champion City Comics. The financial cost of starting this site on Blogger in 2009 was ten dollars and that included the registration of our domain name. Setting my account to automatically renew on a yearly basis was simple. Although the cost was minimal, the platform I chose was not user friendly for webcomics.

A few quick searches provided me with some helpful tutorials for improving the appearance of my site. I immediately discovered that Blogger didn't really seem to be the ideal spot for my webcomics. Sites like Drunk Duck allow you to navigate easily from page to page of a webcomic, while Blogger doesn't have anything like that for webcomic creators. Blogger still doesn't have anything like that, which I find somewhat frustrating because catering to webcomic creators worked for hosting sites like WordPress.

I knew there had to be a way to have a successful Blogger page featuring webcomics. It took me some time to get it right, but the discovery of the embedded PDF seemed to be a lovely fit for Champion City Comics. Scribd and Issuu were two sites I discovered while doing some PDF research. If I had a twenty-two or twenty-four page comic, I could convert those pages into a PDF which would be converted at Scribd or Issuu as a digital file I could embed on my site. Take a look at Dr. Death vs The Vampire which was embedded using Scribd and The Champion City Fire which was embedded using Issuu. This would be a good time to mention that those comics have some spicy language and some violence which might not be your cup of tea.

The site was created and the comics were embedded as PDFs for easy viewing. It seemed to me that Champion City Comics was on the right path to success, but that was not the case. Not long after our launch, I discovered an article by Sean Kleefeld, a comic book expert and industry researcher, where he showed how the embedded PDF was not the best fit for creators. His 'Exhibit A' for the article was none other than Champion City Comics. Ah, fame.

I have more to write about webcomics and I'll put another article together for tomorrow. Maybe. I hope.

Email ThisBlogThis!Share to TwitterShare to FacebookShare to Pinterest
Labels: Developing a webcomic, how to make a webcomic, Webcomic tips, webcomics