My interest in writing comic books started sometime in 2004 when I was reviewing comic books for Silver Bullet Comics (RIP) and Erasing Clouds. My reviews mainly focused on small independent companies and self-publishers. Some of the titles were amazing while others were so bad that I should have scanned them, created a PDF, titled the thing 'How Not To Write Comics', and uploaded it to Scribd for the world to read.

If you followed the Erasing Clouds link then you saw the title of my column was Champion City Comics. I was born and raised in Springfield, Ohio, which was once referred to as "The Champion City" because it was the producer of the Champion Farm Equipment brand. Also, it works well for a comic book review article and it's even better for a comic book and webcomics community.

A few story ideas floated around in my head, but I decided to do something that blended noir with vigilante tales. I was reading a bunch of Batman graphic novels at the time and was watching films like Blast of Silence, The Killers (1946), and Le Cercle Rogue. The Champion City Fire was a title that I wrote down in a notebook and it stuck with me for months. There was a story with that title and it took many synopsis revisions before I came up with a story that was good in my opinion.

I came up with a rough guide to a six issue comic book series c.2004 and a few months later I had developed a rough draft of issue #1 of The Champion City Fire. It wasn't easy, but I developed a twenty-five page script and eventually sent it to a colleague for review. Their critique of my script was blunt but diplomatic. It takes a special person to tell you that your story sucks. I re-wrote the script and my colleague found the changes to be an improvement. Then I was hit with a moment of inspiration, re-wrote the script again and sent it off for review. My colleague was impressed, and that mini boot camp of script writing was tough but necessary in my writing evolution.

Finding an artist was not difficult because my cousin, Joe Haemmerle, was a talented artist that graciously accepted my offer of collaborating on a comic book project. Joe must like me because he's still around some six years later. Also, he's still a very talented artist.

Let's talk about the story. The Champion City Fire is set in the mythological city of New Ravenwood, Ohio. Two time traveling vigilantes arrived twelve years ago and murdered ten of the most notorious criminals in the city. Detective Johnny Magnum was assigned to investigate the murders and discovered that all ten victims were in the proverbial doghouse of New Ravenwood's crime lord, Alex Empire. Magnum's top witness was an insane former used car salesman, but everything went cold and the cases were left unsolved. Fast forward twelve years and the time travelers have returned and are back to taking out New Ravenwood's infamous criminals. This is Magnum's last chance to solve the crime and figure out who was behind the murders.

I've re-written that previous paragraph plenty of times and have realized that my "hook" for grabbing readers might not have been solid as I wanted. At the time it was viewed by me as a golden script. No, it was a golden script plus it was in the running for an Eisner Award. I'm amazed that I didn't dust off some shelf space for the award I was sure to win.

I sort of cringe at character names like Johnny Magnum and Alex Empire, but I'm proud of the script. My earliest scripts didn't contain the hard-boiled inspired captions and dialogue. Those early scripts featured some seriously bland captions, plus a few captions were basically these horrible text bombs.

The artwork was also a work in progress. Joe and I knew that color comics were appealing to editors and readers, so we went with a style that looked incredible when we started the project. Below is the proposed first page of The Champion City Fire. Not only does it have the original artwork concept, but it features the early draft of the script which was heavily revised. This is what happens when you have a script that's not critiqued. 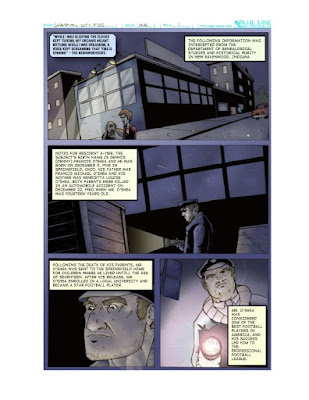 Not only did I revise the script, but Joe decided to give the story a new and improved design. The page below is the result of our changes. This is also page one of the story and you can see the differences. 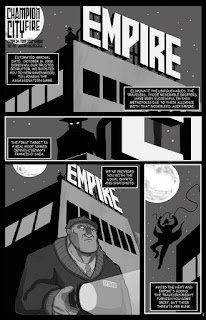 The artwork by Joe Haemmerle is excellent and I love his minimalist use of colors. Joe's style is a great asset for Champion City Comics and I'm always excited to see what he brings to the table when we collaborate on a project.

Something I learned while researching writing a script is that you have the basic story people see on the surface but there is something else to your story that some readers may or may not recognize. The Champion City Fire is not just a story of time travelers and cold cases but it's also about how vigilante justice is basically an act of sheer folly. We're not talking a revenge tale, but the act of reactionaries serving as judge, jury, and executioner. It goes back to reading Batman graphic novels. Batman is one of my favorite characters and he's a vigilante. The inconvenient truth is that he's never solved the cycle of violence that plagues Gotham. Batman fueled the criminal fire and never put it out. The argument goes deeper than this statement and I'm sure an entire novel can be dedicated to vigilantes in comics.

I've embedded the story below for you to read and hope you enjoy the first twelve pages of The Champion City Fire. Yes, we only completed twelve of the twenty-five pages. It was always our intention to finish it, but we never got around to it, which is typical of some Champion City projects. I don't want that last statement to be taken the wrong way because I'm very pleased with our work. Some of our stories are completed, others are a work in progress, and some are in a state of development hell.