Kav and Tony Break It Down: Superman's Pal Jimmy Olsen #98 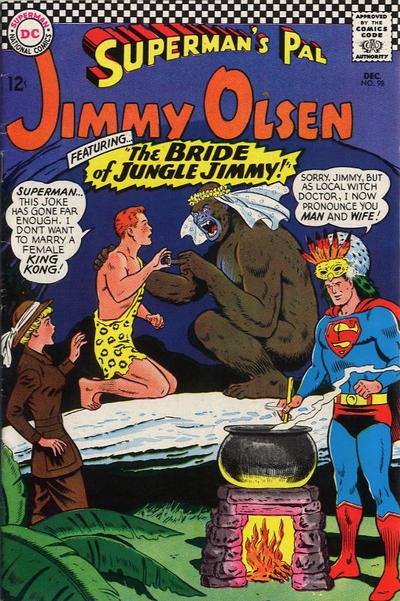 Kav and Tony are two webcomic collaborators and lifelong comic book fans having fun reviewing titles from the Golden and Silver Age of Comics. They know these comic books were published with a young audience in mind, but they couldn't pass up the opportunity to make fun of goofy covers, ridiculous plots, silly dialogue, and pseudo-scientific shenanigans.

Kav: Back in the 60's DC did a survey and kids chose gorillas as their favorite cover feature, so they went way overboard on the gorilla covers. They popped up everywhere. Jimmy Olsen and the science fiction titles seem to have taken the brunt of the damage. Here we see the inevitable final result of this nonsense-Jimmy being forced to marry a gorilla by a Witch Doctor Superman. Many times where there was a gorilla, a witch doctor wasn't far behind. We see Jimmy's new wife already screaming at him about something. Get used to it buddy. Of course Lucy Lane has to be present whenever Jimmy is humiliated. I read a lot of these Jimmy Olsen stories and Superman is always depicted as the trickster character from Joseph Campbell's Hero's Journey. Kinda helpful but mostly not. In 'Midas of Metropolis' Jimmy had to spend a million dollars to get a million in 24 hours. He was down to his last 10 cents, it was Sunday, and everything was closed. Superman just stood there grinning instead of telling Jimmy to put the dime in the parking meter before he gets a ticket. He got the ticket. I've had friends like this. Don't ask me what Superman is stirring in the pot but it's an appropriate image for sure.