Based on Dr. Death vs. The Vampire by Aaron Schutz which originally appeared in the Magazine of Fantasy and Science Fiction.


A bus travels along a highway in the Eastern Oregon desert. On board is an almost superhero known as Dr. Death, a man who has the power to euthanize terminally ill people and psychopaths. While on the bus, Dr. Death encounters a terminally ill woman who is traveling with a vampire companion that feeds off of her pain and suffering.

You are not seeing double. Champion City Comics has decided to relaunch our popular webcomic by creating a second version that is darker and grittier than the first.

Doctor Death has survived a near-death experience with a psychic vampire in the Oregon desert and he has also defeated a murderous zombie in Las Vegas. Wanting to avoid any problems with law enforcement, Doctor Death returns home to his superhero league headquarters where he discovers that someone or something has been stealing the memories of high ranking officials, world class scientists, and a retired Navy SEAL.

Recommended if you like The Watchmen by Alan Moore 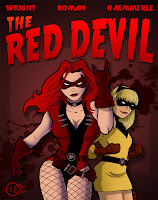 
Synopsis: Dublin O'Darby (The Red Devil) is an international crime-fighter who works for Sebastian Coronado, the director of an organization dedicated to combating cartels of evil. Joining The Red Devil is teenage sidekick Charlotte Murphy (Kid Diablo). In the exciting first issue, Red Devil and Kid Diablo track down a dangerous ninja, Silent Noise, who has stolen a mysterious ring which once belonged to a diabolical group of demon worshipers known as the Order of Methalius..

Recommended if you like: Classic pulp stories, action-adventure tales, and Dick Tracy

Overview: Thousands of years ago, demons and angels engaged in an epic battle. Fast forward one thousand years and a crime-fighting gargoyle encounters an angel.

AM I AN A-HOLE OR IS IT EVERYBODY ELSE? 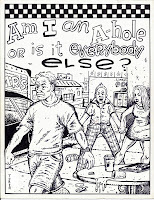 
Synopsis: This tale follows the day-to-day adventures of Mr. Bob Toben who has been described a curmudgeon, a surly fellow, and a total a-hole. Maybe the people are right or maybe he's just one misunderstood dude. Take a read of the comic below and enjoy.


Recommended if you like: The works of Harvey Pekar and R. Crumb

COMICS FROM THE EDGE 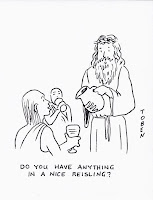 
Synopsis: Comics From The Edge is a daily comic strip that is for fans of one-panel humor strips like The Far Side.

Private First Class Chris Richland has survived 164 days as a soldier in Afghanistan. But on day 165, his life and the lives of his fellow soldiers will be forever changed by the horrors of war.
Recommended if you like: The 'Nam by Larry Hama

Pencils and Inks: A. Kaviraj

In this issue, a young hero tries to figure out how to begin a career as a costumed crime fighter. His first challenge, finding a name.

Writer: Josh Dahl
Pencils, Ink, and Lettering: A. Kaviraj
Genre: Superhero
Overview: Rapid City is a semi-autobiographical superhero comic book. As writer Josh Dahl faces the challenges of producing a monthly superhero comic book, the character, Kinetic, faces the challenges of becoming a superhero in Rapid City.
In this issue, Kinetic faces the seemingly insurmountable problem of street-crime and finds that his actions have a much greater, and far different, impact than he expected.

Writer: TonyDoug Wright
Pencils, Ink, and Lettering: Victor Pozzi
Genre: Superhero
Overview: Grand Harbor, Michigan has been overrun by criminal elements including the blood-thirsty Savinni crime family and the sadistic crime lord, The Czar. Overwhelmed by the violence, the citizens and local law enforcement ask the government to send protection. Their saviors are a task force trained to eliminate crime by any means necessary. They are THE HELL FIGHTERS.

Naira, an intergalactic scientist, begins a research project on an undiscovered planet in a galaxy known only as A-1166. To her surprise, the planet is home to a species of plant that has the ability to cure many diseases, but to her horror, the planet is inhabited by a race of violent creatures.
Recommended if you like: Stan Lee and Jack Kirby Marvel titles and classic sci-fi movies


TALES FROM THE FUTURE: A SCI-FI ANTHOLOGY

Champion City Comics is pleased to present Tales From The Future, a sci-fi anthology inspired by the works of Philip K. Dick and classic golden age comic books!
Recommended if you like: Classic sci-fi tales 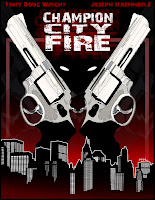 Synopsis: New Ravenwood, Ohio, also known as The Champion City, is full of crooked cops, pushy dames, untouchable crime lords, and gun-wielding vigilantes that can travel time. Two clean cops, Johnny Magnum and Andrea Hammer, are on a mission to put an end to the crime and corruption in The Champion City by enlisting the help of a retired cop and a patient from an insane asylum.

Writer: TonyDoug Wright
Pencils, Ink, and Lettering: A. Kaviraj
Genre: Crime Noir
Overview: Nick Hamilton, a former small-time criminal, is on a serious revenge mission to kill Frankie Paradise, a notorious mob boss responsible for the death of an innocent man and his family. Joining Nick on his mission is Marshall Jackson, a weapons dealer, and The Kid, a teenage prophet and gun for hire. Nick, Marshall, and The Kid must take out Paradise's henchmen in order to get to their main target, Frankie Paradise.

Pencils and Lettering: Victor Pozzi
Genre: Science Fiction Thriller
Seventeen years ago, a college student named Charlie Westwood disappeared while investigating a secret society in his hometown of New Ravenwood, Ohio. A police investigation of Westwood's disappearance led to a dead end but an archivist at a local university later discovered a photograph of Westwood. The photograph pre-dated Westwood's disappearance by nearly sixteen years and the archivist decides to investigate the whereabouts of Westwood and the secret society.

Gheldo is a dream-like tale of confusion, loss, fear, and hope.

Recommended if you like: Titles from Top Shelf Productions

Genre: Historical Fiction/Western
The Captive is based on the 1837 poem, La Cautiva, which tells a chilling tale about the capture and escape of two Argentine settlers, Brian and Maria.


Phoebe & Eddie are two Midwestern teenagers under the influence of rock & roll, comic books, vintage clothing, late night infomercials, caffeine, video games, John Hughes movies, and bad Chinese food. They claim to be the coolest duo on the planet but unfortunately the world has not received the memo.

Recommended if you like: Incredibly sarcastic pop culture humor