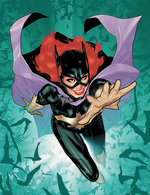 
Before I say anything else, let’s all just agree that if you were going to fix Barbara Gordon’s legs and make her Batgirl again, the writer you’d want for the series is Gail Simone. It’s not just that they’re both red-heads, it’s that Simone has been the main driving force behind the character’s very many high points through the later half of her Oracle career in Birds of Prey. And while you can argue about whether ending such an effective and unique character (as well as the fun Stephanie Brown Batgirl) is good thing, if you’re going to do it, get Gail Simone.


Simone is writing about a slightly different Barbara Gordon to the one we left only a week ago. This Babs was still shot and crippled by the Joker (a scene that gets its almost obligatory replay) some time in the recent past, and spent three years as a paraplegic, with no reference to any career as Oracle - though this might just be an omission. She’s now donning the Batgirl costume again and is spreading her wings: fighting some rich kid joy-murderers, confronting a strange Final Destination themed villain, and moving out from home and into a cheap apartment with a quirky, fight-the-power flatmate.


Simone brings almost all her trademarks to the series. The smart dialogue interwoven between captions and voice bubbles feels almost Whedonesque in its snappiness. Her bad guys are typically dark - with the creepy home invasion murderers at the beginning of the book typical of her ability to create simple yet effective nastiness.


Combine that with some good pencils from Adrian Syaf, who I’ve never run into before - though I gather he worked on Brightest Day - and you’ve got a solid, good looking book. The only visual thing that bothered me was red-headed Jim Gordon. I’m not certain if that’s a colouring mistake or something else entirely.


My only complaint (other than ginger Gordon) is an attempt to create tension in the cliffhanger that felt forced and false. Batgirl freezes when the villain, “The Mirror”, points his gun at her spine in a mirror of the Joker before, and the cops on the scene accuse her of being culpable in the damage The Mirror caused while she froze. The whole takeout seemed strange. Especially as said cop was doing very little, too. Maybe it’s just there to build up the idea that Batgirl still has some trauma to get through before she’s running at full speed.


But ignoring what is, in the end, a minor quibble, and, of course, the controversy of why this book exists at all, and instead looking at it for what it is: a entertaining comic book. I reckon Batgirl #1 is a solid addition to the New 52. It’s not groundbreaking stuff, but it’s good, and promises to get better in the hands of one of the strongest talent line-ups of the reboot.

Andrew Moore is rambling man, and he rambles too much about comics, soccer and South African politics on Twitter at twitter.com/bathoz.
- September 13, 2011