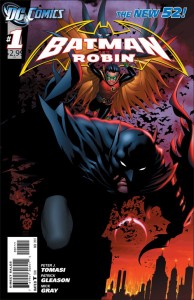 I have been a faithful Batman reader for many years, but I must admit that my reading has not been up-to-date over the past four years. The birth of two children, adding a second job to the mix, launching this webcomics page, and everything in between has had a higher priority over my Batman reading. Life has slowed down just enough for me to return to my regular comic book reading schedule. The New 52 by DC has taken up the majority of my new found reading time and I had placed titles like Batman & Robin on my "must read" list.

Silly me, I had some idea in my head that it was going to be Bruce Wayne and Dick Grayson rebooted with a fresh look at their beginnings as a crime fighting duo. Wrong. It's Bruce and Damian Wayne. Instead of the dynamic duo, we have the dysfunctional family.

I was reading Batman when Grant Morrison brought Damian into the spotlight. It made sense that Bruce would have some baby mama drama at some point in his life. Damian Wayne is Bruce's love child with Talia al Ghul and his boy is one evil, violent little kid. At ten years of age, Damian has committed more acts of violence than Walter White, Jesse Pinkman, Gus Fring, and Mike put together. That's a Breaking Bad joke, folks. Check out the show because it's fantastic.

Anyway, Damian has been written as this ultra-violent ten year-old that speaks as if he were thirty or forty. Damian has the unlikeable angle working for him but he also has the unbelievable factor as well. One can not honestly believe that a child this age has the skills both physically and mentally to be a top-notch assassin or crime fighter. Like it or not, he's the Robin in this new run of Batman & Robin.

This first issue takes us back to Crime Alley, a place we've been many times as readers. Bruce takes Damian there and we have some tension between father and son. Bruce wants Damian to have some respect for his parents, but Damian could not care less about two dead people. The way Damian disrespects Bruce's parents is pretty infuriating. I do not support child abuse, but I was waiting for Bruce to break out the pimp hand and put Damian in his place. OK maybe not the pimp hand, but perhaps a Rick-James-sucker-punching-Charlie-Murphy-at-the-China-Club moment would suffice. UNITY! That was a Chappelle's Show joke and you should climb out from under your rock if you have never watched an episode. Seriously.

I understand that tension between two main characters is what fuels a good story. It keeps the readers interested and builds up some interesting story lines. What bothers me is the fact that Damian should be twenty-one in this story for this angle to work. Don't tell me that it's more believable if he had a younger son because Bruce has been a player for a long time.

Bruce decides that mourning the death of his parents at Crime Alley is a thing of the past and he has decided to celebrate their life. Really? What happened to Bruce Wayne? He watched his parents get killed in that alley and that led him down the path to becoming Batman. I find it more than unlikely that a man with Bruce's ego would just stop focusing upon his parent's death. It's that easy to switch off Bruce's rage and anger? I don't buy it for one minute.

With that working against the story, we do have bright spot with a villain that seems interesting. All I can say is that we have some super-stealth villain that will cause some major problems for father and son. Also, there is a security breach at the local university where they apparently have a nuclear reactor that rivals anything at a nuclear power plant. I have no idea how Gotham has not been blown up in some bizarre nuclear accident. That city should be Chernobyl: Part Two.

The problem with Batman & Robin is that we have a Batman that has stopped focusing upon his parent's death and a Robin that's unworthy, unlikeable, and unrealistic as a sidekick. This bad formula makes this title a bad start to what could have been a great series.Then again, I'm one reader and one voice. However, this reader is not at all interested in checking out future issues of this series.


TonyDoug Wright is the owner and editor for Champion City Comics