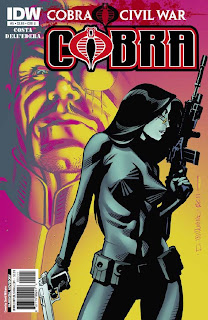 If G.I. Joe defined your 80s kid experience and you think the filmed diarrhea called GI Joe: The Rise of Cobra borders on child abuse, then IDW has THE grown-up title for you.

Writer Mike Costa and artist Werther Dell’Edera keep up with the Cobras in this month’s COBRA: Civil War #5 which, if you haven’t been keeping tabs on it, follows a handful of COBRA elite as they vie for the vacated throne of Commander in a jolly free-for-all power struggle that’s like a lethal backyard game of Duck, Duck, Goose meets Russian Roulette. Regular series artist Antonio Fuso sits this one out and that’s fine; Werther’s pencils fit neatly into Antonio’s very sparse detailing, a look that suits the tone of the series perfectly. As always, Costa’s damn good at nailing character nuances, like the Baroness’ icy disposition and Tomax’s cavalier ruthlessness.

In this issue—and we’re keeping it spoiler-free, so keep reading—we’re seeing the fallout from a rogue Joe’s covert actions to cover his tracks as the truth starts to surface. Seems he stands a lot to gain from aligning himself with one Major Bludd, but since the good major’s a—well, a bad guy—not all looks hunky dory for the turncoat Joe. This is all hitting the fan as COBRA sniper and all around guy-you-don’t-wanna-meet Blacklight heads cross country in a return trip, leaving bodies and excess property damage in his wake. We don’t know what it is exactly that he’s coming back for; all we readers know is that whomever he comes across had better have their final affairs in order.

I don’t buy IDW’s other ongoing GI Joe series that crosses over with this title, simply because this series is villain-centric and as a kid I dug the Snakes more than the Joes (the COBRA Rattler remains the coolest toy I ever drooled over.) Thanks to Costa’s smart dialogue—and when I mean smart, I mean Jeopardy contestant smart—we’re flies on the wall to the underhandedness of a COBRA corps who don’t terrorize the world for monetary or political gain— they terrorize because they feel they’re entitled to do so.

And the splash ad on the last page shows Blacklight, the U.S. Capitol building and some crosshairs, so if you’re down with realistic and the militaristic, drop the $4 on this issue and add this title to your monthly pulls.

A resounding 4.5 stars from the possible 5.

Brian Cee is a contributing writer at Champion City Comics