Champion City Comics is pleased to announce that we have another title that is currently in development, which will be released in the upcoming months. Don't forget that we also have Red Devil, a pulp inspired series, and Coalwater, a western, in development.

It was the spring of this year when Bret Kinsey, a comic book writer and artist from Muncie, Indiana, contacted me regarding two comic book ideas. Both stories were good, but the one that really caught my attention was The Burning Blade.I'm not going to give too much away, but this story definitely is a fun mix of Dungeons & Dragons and horror movies. Bret teamed up with artist Tun Myo Hlaing and the end result is another exciting edition to the Champion City collection.

BURNING BLADE SYNOPSIS: An ancient evil has returned to the lands of Thordasha. Daemon Devilwood, an orphan of a decimated race of wood elves, and a young mercenary, Rivek, must battle the hordes of death to face an enemy of unfathomable horror. Will the companions survive the darkness that follows them? Only time will tell in this dark fantasy of revenge, death, and redemption.

Enjoy a teaser image and be sure to click on the image to enlarge. 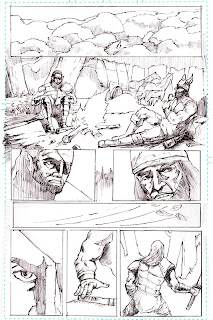