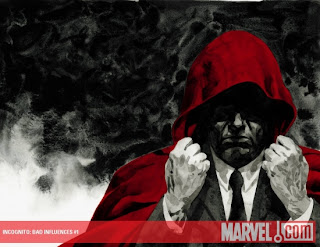 By Ed Brubaker and Sean Phillips

The sequel to the groundbreaking Incognito returns to Zack Overkill, hero or antihero-you decide. In the first Incognito, Zack went from a powered-down ex supervillain to a powered back up super hero. In the second Incognito, he does the reverse-goes from a super-powered member of the SOS to being framed and sent to SUPERVILLAIN MAX. While the first graphic novel ended on a positive note, this one ends on a downer-which leads me to believe there will be a third story. So Bad Influences is kinda the Empire Strikes Back episode.

The artwork in Bad Influences is great, but it looks like Sean was under a deadline, as it lacks some of the spectacular panels frequently seen in the first. I have noticed that Brubaker often writes women as the downfall of the hero. In Bad Influences, Zoey Zeppelin turns on Zack at the end. This I assume comes from his own experience with his first girlfriend, who was evil. Also, he writes great crime stories, because he used to commit armed robberies with his friend, who shot someone to death in a parking lot and is currently in prison. Read Brubaker's Lowlife, his autobio book if you want the full story.

So Zack Overkill seems to flip back and forth from good guy to bad guy but we always root for him. His opposite number is Simon Slaughter-who also used to be a top member of the SOS until he was 'left out in the cold' too long and now has no moral compass left. And the ultimate nemesis is the BLACK DEATH, an unkillable villain who is barely contained in SUPERVILLAIN MAX, the high tech prison using a good part of the electrical grid's power just to contain him.