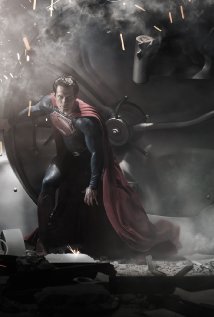 OK, before I review a movie which hasn't come out yet let me point out all the defects in Superman Returns in the hopes that these types of lame defects will not be in the new film.

First of all, using Luthor for the villain is so worn out. And having him pull the old 'kryptonite in my back pocket' ploy is even more worn out. You'd think Superman would have learned by now to scan the dude before approaching him. And what was with Superman being weakened by kryptonite one minute, and getting his ass kicked then minutes later lifting an ENTIRE CONTINENT of kryptonite into space? WTF man?

Also newsflash to Superman: a bunch of crystals which anyone can walk into at any time does not constitute a 'fortress'. Hello-maybe you should have stored those crystals which can GROW INTO A CONTINENT on the moon? Anyway. So the new movie: (Budget: $175,000,000!) The costume looks cool and gritty/noir:
http://www.movie-moron.com/?p=17748

Squaring off against the superhero are two other surviving Kryptonians, the villainous General Zod, played by Michael Shannon, and Faora, Zod's evil partner, played by Antje Traue. Also from Superman's native Krypton are Lara Lor-Van, Superman's mother, played by Ayelet Zurer, and Superman's father, Jor-El, portrayed by Russell Crowe. Rounding out the cast are Harry Lennix as U.S. military man General Swanwick, as well as Christopher Meloni as Colonel
Hardy.

Ok. Why are the only two villains Hollywood can come up with are Luthor and Zod? Come on guys-FRESH. Oh yeah, that's right, we're talking about Hollywood. Nevermind.

So while I have hopes about this movie, I also have doubts. At least they s***-canned the entire cast from the last movie the annoying angry Lois, the goofy Jimmy, the nebish Superman....that's good. But in a PC move they changed Perry WHITE into Lawrence Fishburne....what the heck? Ok whatever. Maybe Jimmy should be a brother too.

I'm gonna step out on a limb and given DC's History with superhero films (No, I didn't like ANY of the Batman movies-but that's another rant. I will say this-beating on a guy using kevlar gloves when he's wearing white clown make up and you get no makeup smeared or any blood is FAKE!) this move gets 2.5 out of 5 stars.