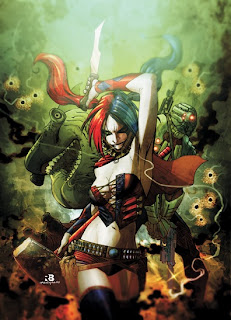 Writer: Adam Glass
Artists: Federico Dallocchio, Ransom Getty, and Scott Hanna
I wasn’t sure how I felt about Suicide Squad at first because I wasn’t familiar with them before the reboot, but I figured I didn’t have an excuse not to jump on board. Overall, it was a good decision. The Suicide Squad consists of mostly non-famous characters, including Harley Quinn, Deadshot, El Diablo, and King Shark.

The first issue starts off with a brutal torture session where someone is trying to get the team to admit who's their leader. There are plenty of interesting panels and the characters are introduced as they are tortured. Harley and Deadshot have their backgrounds explained through flashbacks. The dialogue between the characters and their captors is great because some of it is funny, some of it is deep, and some of it is personal.

How did the end of in this situation? Somehow, they ended up on the team by being “volunteered” to assassinate a guy. During the hit, a bomb goes off, knocking them all unconscious. When they wake up, they’re imprisoned and being tortured. Now, that’s pretty classic, boring story-telling. Flashbacks and torturing until somebody breaks seems clichéd, but the story is action-packed enough and the dialogue is good enough that it keeps you hooked.
In the end, somebody breaks and it turns out that it’s all a test. So the team ends their first real mission, and they have to kill over 60,000 people in less than 6 hours. Also, it turns out that Amanda Waller is behind the whole thing. And although she’s super sexified, she’s still a bitch.
Have you been looking for the hooded woman? Mike Knoll and I have been calling her “Time Hoodie.” She usually appears in crowds and has some kind of glow about her. She’s in every new 52, so keep your eyes peeled.
Michael Newton is a contributing writer at Champion City Comics.