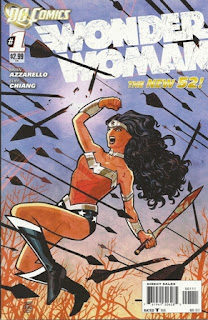 
Someone once said to me, "Brian Azzarello can't write superhero stories". I do not remember who said that to me, but the comment struck me as a bit harsh because I thought Batman: Broken City was a good story. Now I have enjoyed his non-superhero work with 100 Bullets, and I feel that Azzarello brings a gritty and edgy quality to his work. I thought he would do something gritty and edgy with Wonder Woman, so I decided to pick up the first issue from the New 52.

By no means am I a Wonder Woman aficionado. I have nothing against the character and have no real excuses for not reading the title. As a reader of DC Comics, my attention has always gravitated towards titles like Batman and The Flash. The New 52 has for some reason given me the motivation to check out some titles that I have ignored in the past.

The first issue of Wonder Woman takes place in three locations: Singapore, England, and the United States. In Singapore, we find a strange "Sun of a King" searching for answers about a child of interest. The child is linked to a situation in Virgina where a young woman encounters Hermes, a messenger, and some demonic centaurs. Our young woman in distress is magically sent to England where she meets Wonder Woman.The two have the usual comic book first introduction dialogue and make their way back to Virginia where Wonder Woman engages the two centaurs in combat.

The story is well paced and full of action. Azzarello has an intriguing story developing and the art by Cliff Chiang is equally impressive. These two have a good chemistry going on, so I'm interested to see if these two go three, six, or twelve issues as a team on Wonder Woman. I've been disappointed with some of the New 52 titles and I see this one as one of the best so far. As you know, there are still more titles to be released, so we will see how this measures up against the rest.