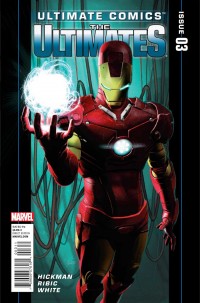 Writer: Jonathan Hickman
Art: Esad Ribic
Someone once said that art imitates life; that seems fairly apropos, considering the hell-in-a-hand basket state of global affairs in the real world. But at least the real world’s not Marvel’s Ultimates world, ‘cause boy, have problems really compounded, as evidenced in issue #3 of the relaunched Ultimate Comics The Ultimates.
Hawkeye’s back on home turf, fresh off his suicidal jaunt in Southeastern Asia (that story wraps in next month’s Ultimate Comics Hawkeye finale.) Here, and if you’ve been following the story or are considering it, know that Thor has no home, mainly because some super-people decimated Asgard and all its godly inhabitants. His powers waning, Stark concocts some stand-in armor for the Thunder God so he can keep up with all the hammer tossin’ that needs to be done, because the good guys have lined up to take it to baddies who’ve said to hell with drawing lines in the sand and instead want to eradicate all forms of human resistance. Needless to say, out of the 22 pages in the book, I’d say most of them are all high on Marvel-esque action. With a showdown a few thousand feet in air, Fury, Hawkeye, Spider-Woman, Black Widow and the SHIELD fleet are all Captain Picard about subduing the Children of Tomorrow while tucked away in the Triskelion as Iron Man and Thor vie for air superiority against the machinated horde.
The story keeps in line with its two predecessors, delivering quality story and dialogue from writer Hickman and wonderful pencil work from Ribic. If I had to ding the story for anything, it’d be over Spider-Woman’s look: take Spidey’s black costume, color it red and throw on a wig and voila, Ultimate Spider-Woman, AKA Ben the Spider-Clone in drag. I know that’s the way she’s being handled in the Ultimate-Verse, but geez. Google “ultimate Spider-Woman” and see for yourself.
Verdict: 4 out of 5 stars. Would of garnered an extra half-star, but the wig thing’s too creepy.