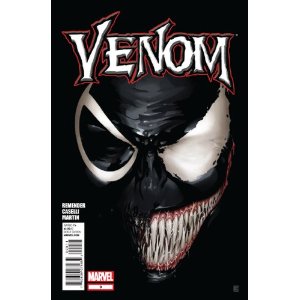 
I’d love to intro with some lyrics by supplanting the name Venom to rock the 80s Duran Duran hit “Rio,” but the musical part of my brain is fried. So, spoiler: the remainder of this review plays it straight—straight as I can manage, anyway.

If you haven’t been following the latest incarnation of Marvel’s gooey whip-tongued symbiote – either you were put off by his treatment in Spider-Man 3 or you completely avoided the Spider Island arc like I did – know that Flash Thompson is the new Man in Black— that’s the same Flash that gave wedgies to puny Parker, mind you. Apparently he cleaned up his act, served his country (lost a leg for his troubles, too) and volunteered for the Army’s Venom project. None of this is news if you’ve been following the news wires.

Issue #9 of the book hit the stands Wednesday, appropriately titled “Capital Punishment.” To that effect, the story lives up to just that: in the aftermath of a spider infested New York, some villains are having a field day robbing and looting and whatnot. The foil for our Venomous hero drives an indestructible tank. He won’t let you forget either, since he mentions it a few times throughout the book. Agent Venom, as he’s referred to, shows up to stop the guy from cleaning out NY’s financial district in pretty much a standard superhero type affair. I can’t remain spoiler-free, so here’s the beef: in the first few pages, the villain kills an innocent without much thought. Later on he does the same thing but for some reason is regretful and pleads his case to Venom, who flips out and smears the guy’s carcass all over creation before biting his head free. Capital punishment, indeed.

Nice touch, even though the villain’s remorse made no sense in relation to his previous act. Having Flash being the only guy who can handle the alien, and subsequently having him struggle to maintain his cool during tense moments when he wants to “Hulk out,” makes for an interesting dichotomy. I’m digging Remender’s angle as Flash walks the tightrope between heroics and alien-fueled chaos. Played the right way, having Flash cross dangerously into super-villain territory is a treat; lots of possibilities there.

What I don’t care for: the first-person narrative sounds disjointed, and not in a good way. There’s a staccato beat to his narrative captions that just don’t fit what I think would going through Thompson’s head, things like (and I’m not quoting) “Next level. Up ahead. Have to get there. To win.” This happens quite a bit and reads weird. I’d like to hear the alien’s dialogue, or at least some nod to the difficulties in keeping the symbiote in line.

All in all, I like the direction but I’d like to hear a little more internal struggle going on in Venom’s noggin.