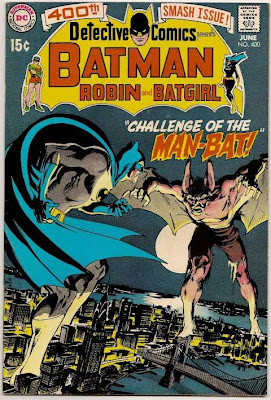 By TonyDoug Wright and A. 'Kav' Kaviraj

Kav and I love to talk about comics and we recently decided to review some famous and some not-so-famous comic book covers. Last week, we discussed the cover for Batman #222 which saw Batman and Robin trying to solve a mystery involving a band that looked like The Beatles, but due to copyright restrictions, were re-named The Oliver Twists.

This week, we have the 400th issue of Detective Comics, which is titled 'Challenge of The Man-Bat'. Released during June of 1970, this comic book was the first appearance of the Man-Bat. If we are talking Batman covers then let's talk about Neal Adams, a true comic book legend, who designed this awesome cover. We have a great showdown between Batman and the Man-Bat over Gotham at night. I love how both characters are hovering over Gotham and are ready to do battle. The colors are very well done and there is nothing overly flashy in the look. Fantastic.

TonyDoug Wright is the owner and editor of Champion City Comics. His webcomics include Dr Death vs The Zombie, The Red Devil , and Day 165.


A. Kaviraj is an artist and writer at Champion City Comics. His works include Dr Death vs The Vampire, Doctor Death vs The Zombie, and The End of Paradise.
- April 04, 2012