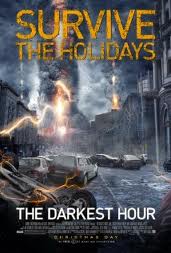 Ok, I was HIGHLY sceptical of this movie because it was so like one of those lame knock-off movies. Invisible aliens attack Earth and the four young people are facing this threat. But it was actually pretty good and whoever wrote the thing actually bothered to study science. Very refreshing, Hollywood when a screenwriter studies something besides OTHER SCREENPLAYS. Get it?

Ok, so two entrepreneur dudes go to Moscow to sell their new version of Facebook, and they get screwed by the Russian dude who steals their idea. But this is all irrelevant, as the aliens appear that night. Very cool visual effects of the aliens descending. Realistic and spooky. This movie is sorta Cloverfield meets Predator meets Independence Day.

So the aliens are invisible-well sometimes you can see like the flaming edges of them-also wherever they go electronics turn on around them-streetlights etc-so that's how you can track 'em. They also explode people kinda like Dr Manhattan did to Rorschach in Antarctica. So a scientist dude they meet up with has developed a microwave gun which is a stun gun for the aliens. Unfortunately, on its maiden flight the thing jams. Scientist dude lives inside a Faraday Cage which as science literate persons know block e-mag waves and the aliens can't see you if you are in one. I had the idea of putting 4 pieces of chain link fence on wheels for a cage so you could move around and go shopping and stuff. Come to think of it, shopping carts could be modified into conveyances if you crouch down in one.

The acting is pretty good, and the pacing is good. All systems nominal, and they meet up with some other armed Russians who have found a way to combat the creatures with missiles. Then we have a really great scene. You know how in movies one person is trying to talk sense into another and you are screaming at the screen what they should say but they never do. Well dude tells the Russians there is a sub in the river and it's going to link up with other surviving subs-a sub is an underwater faraday cage remember. Russian dude says no we stay here to fight till we die. You will never reach sub-too far. So dude says why stay here and be guaranteed death? We may have a small chance but at least it's a chance, and I want to mobilize then fight these f******rs in an organized manner. BEAUTIFUL! That was just what I was wanting to say, and I didn't have to yell at the screen!

One thing that killed the realism a bit was they didn't try to test fire the stun gun after it failed. Man I would be double checking connections and test firing it like crazy, checking power supply etc. Since they didn't do that I was thinking 'Oh they just know it won't work next time cause it's in the script'. Don't let the audience see the script, Hollywood! Same goes for comic writers so listen up to Kav's DVD Reviews.

Another fake part was they think they hear something so dude throws a bunch of small light bulbs to see if they light up, indicating an alien. Well, NONE OF THOSE BULBS BUSTED WHEN THEY WERE THROWN 40 FEET ONTO A STONE FLOOR! I propose this is impossible. I suggest at least half of them would have busted...but it's a minor flaw. Then a part which really pissed me off-an alien comes and starts probing around AND DUDE DOESN'T EVEN TRY THE ALIEN STUN GUN! So his friend gets vaporized. Good job numbnuts. Had me screaming at my screen....also they had one of those 'Chick in danger but can't run until someone comes and escorts her' deals....Chicks are always doing this and 'twisting their ankles' in movies. Gloria Steinem says it's time to stop.

So they meet up with the Russian Sub and dudes start repairing the stun gun. The Flash was apparently on board because they somehow built another stun gun in like an hour-and that would take super speed, gathering the parts, assembling them-you know. Aw, and they were doing so good up to this point. Come on Hollywood-you can do it-just THINK before you script! Obviously no one could build an anti-alien stun gun in an HOUR. This is not genius level thinking but 8 year old child level common sense.

Another part that pissed me off is ONCE AGAIN they didn't test fire the freakin stun guns so OF COURSE they don't work when an alien comes! Then finally dude gets it working and fires a shot then does the thing I hate most in movies-instead of continuing to fire until the alien is toast, he fires once then STARES. Man I hate it when they do this. Green Lantern was full of staring when he shoulda been firing his power ring....Also dude with the OTHER STUN GUN doesn't even try to fire his. Christ.

So anyway, the dumb ass chick gets separated from everyone in the sub and instead of heading for the sub she instead traipses off to a warehouse field and leaves her backpack on the ground so everyone might think she's dead and turn back without her. This movie is starting to fall apart, guys....you were doing so good now it's back to the formula writing.... So chick is in a bus and hears them yelling for her but OF COURSE she can't run herself and has to wait for dude to come ESCORT her. Even when he reaches the bus and they start shouting at each other she doesn't get out of the bus till he COMES GETS HER! This while other dudes are covering him fighting aliens and TIME IS OF THE ESSENCE! Hey Princess-think you can like expend a little effort towards your own rescue??? MOVE YOUR ASS! I'm wondering how she goes potty by herself. Man and I was so prepared to give a good revu for once...sigh.

Then of course they waste MORE time hugging and 'you came back for me' BS. Makes me think they're not really worried cause they know it's A MOVIE....Hollywood: DON'T LET THE AUDIENCE SEE THE SCRIPT!!!! This should be tattooed (backwards) on the forehead of every member of the Screen Writer's Guild so they don't forget. So of course since they wasted so much time hugging and 'you came back for me' 'of course i did' of course an alien comes and traps them in the bus.

Then the part where instead of giving the movie 2.5 stars it went into the negative star rating....the gun jams (AGAIN) so dude for some reason pulls the piece of alien he saved and throws it at the alien on the bus and it makes him EXPLODE. I've had it with this movie. The only reason I'm gonna finish it is so I can jeer at it some more. Did they switch directors midway or something???? What happened????? Now, if the entire Earth had pretty much been destroyed by aliens and I had just discovered that throwing a piece of dead alien at an alien will make them EXPLODE, well when I met back up with my comrades, well that would be the FIRST THING I would mention. Short bus doesn't say a peep, however. I feel like watching Battlefield Earth now. You know- a MUCH BETTER movie? I really want this movie to end, man, so I can just submit my review.

Oh yeah-note to costume department. Every single item of clothing was SPOTLESS. you might wanna dirty em up some if people are rolling around exploding things, fighting aliens, etc. Christ isn't anyone competent in their jobs down in LA LA Land? This is looking more and more like a TV Drama and not a movie.

So, it's negative 14.234 stars for this baby. That's a wrap. I seriously want to sock those who participated in this suck fest. This movie should have been called 'The Darkest Two Hours'.
- August 23, 2012