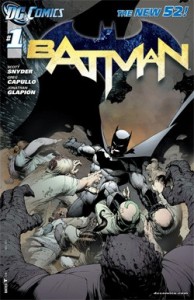 
The New 52 has been more miss than hit in my opinion, which has been discouraging due to the fact that DC seemed to give readers some hope that the re-launch would feature a new, improved, and exciting look at the DC universe. As a fan of Batman, I was excited to pick up my #1 issue of the series, which looked promising due to the cover showing our hero fighting off a horde of his most famous villains. After the reading the first issue of Batman, I believe that I've chalked up another miss for DC.

What's wrong with Batman #1? For me, the story seemed to start off on the right foot with Batman taking on his most feared opponents at Arkham. Fights like that never get old and they make for good reading. I applaud Scott Snyder for giving fans a dose of excitement. As the story went on from there, I felt like I was going down the same old path with some recycled story lines that were not intriguing. Without spoiling too much I will say that the book walked into territory from City of Light and Bruce Wayne: Fugitive & Murderer. For those of you that read this title, I think you could agree that the "twist" at the end was not a twist.

I have read a few reviews and some forum comments that crucified the artwork by Greg Capullo. I disagree with the outrage. Batman comics should be less slick and more gritty art-wise. Capullo is not looking for flashy because Gotham is a pit of crime and the art must reflect the tough nature of Gotham.

The writing leaves me to wonder what to expect from Batman.  As a reader, I was looking for something new, improved, and exciting. As stated earlier, it seemed that old stories were brought back. Scott Snyder has a tough task with this title because Batman has been the face of DC for a long time, and I know this statement is debatable, but it would be a great injustice to see Batman fall from grace. I'm going to read the upcoming issues and hope that things improve.