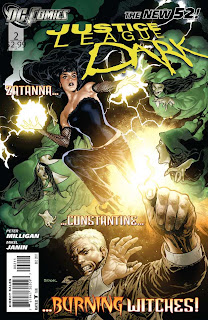 Thumbing through this past summer’s New 52 preview handout, I made a mental of note of what books were 'Gimmes', what were 'Maybes' and what should be avoided like Christmas eggnog at a June picnic. Justice League Dark showed the most promise of the 'Gimmes' and with issue #2 out on the shelves, I can safely say my instincts served me well.

Why it works: besides A-game penciling from Janin and Milligan’s storycrafting, the premise –tossing a bunch of supernatural C-listers onto a ragtag team of throwaways—works because we readers haven’t seen anything quite this before. Yeah, the companies have teamed up some no-names in the past to great success (none better than Secret Six and no, I’ll never stop harping about its cancelation.) But instead of haphazardly putting a bunch of ingredients in the pot and hoping for a winner, these folks have a reason to be. Seems like while other Leaguers like Superman and Green Lantern have no problem mopping up the galaxy with alien arse, when the baddies turn to magic—well, that’s just somebody else’s problem. Zatanna, Shade, John Constantine (!), the underused Deadman—these are the Somebody Elses.

An issue one back-peddle: Enchantress went all Wanda Maximoff on the DCU—that’s to say, balls-out insane – and started dropping some craziness on the world, so much that even Supes, Wonder Woman and Cyborg are freaked out (musta been the hailstorm of teeth, I bet) and can’t figure out what to do. That’s the first issue in a nutshell.

Number Two has Zatanna scrambling to figure out exactly how to approach the situation as she’s taunted with the whole “’I’ll kill you” spiel from Enchantress. The other “teammates” are just getting their feet wet: Deadman’s making amends with his girl, Constantine knows something heavy’s about to happen and is tying up loose ends (re: getting his ass handed to him) in an effort to figure out his role while Shade is MIA. No spoilers, but June Moone’s “rain” is over (for now.) Madame Xanadu—hers is a role you’ll find out on the last page.

Dark’s flavor is all super-heroics interwoven with psychedelic horror; it’s also a flavor I quite enjoy and look forward to from one of the New 52’s brightest spots.