WEBCOMICOGRAPHY: THE END OF PARADISE - PAGES 34 AND 35

Webcomicography is a weekly article from Champion City Comics that goes behind the scenes of our webcomics to give you the complete story. This week we are reviewing pages 34 and 35 of The End of Paradise, a crime noir tale of revenge. 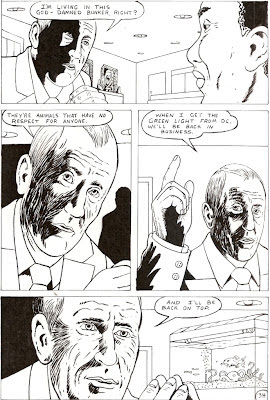 Page 34 is the last page where our main bad guys, Frankie Paradise and Trent Reynolds, are introduced. As the writer, I've established that Paradise is hiding out in a bunker. Why? If you've been following along then you have read that he did it as a service to his friends in the FBI and Congress, but he also went underground due to the emergence of rival powers from Hong Kong and Juarez. Is Paradise a criminal that's also a snitch? Is Paradise a washed-up old man who can't handle a turf war with international gangs? When writing these pages, I saw Paradise as both. He's the old school who has not fully realized the power of the new school. Maybe he's overly confident or perhaps he's slipping. I wanted readers to not get a clear view of Paradise because it would keep them interested in reading the story. 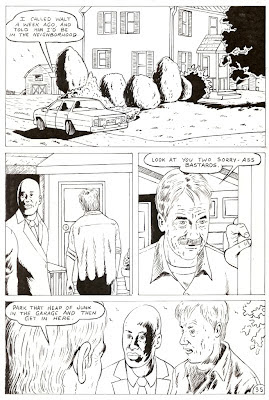 After establishing the bad guys, I wanted to go right back to our heroes, Nick Hamilton and Marshall Jackson. Nick and Marshall have made a stop while on their road trip to find and to interrogate Sato Akio, an accomplice of Paradise. They have met up with Walt Fenderson, an old buddy from back-in-the-day. I'm not going to talk too much about Walt right now because the upcoming pages will give the readers some background on Walt's character. However, Walt's last name comes from Deral Fenderson, a guy I know from Virginia that has lived the do-it-yourself rock and roll lifestyle.

Next week, I will write more about The End of Paradise.

TonyDoug Wright is the owner and editor of Champion City Comics. His webcomics include Dr Death vs The Zombie, The End of Paradise, The Red Devil, and Day 165.
- September 21, 2012