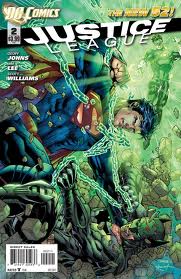 Justice League #2 picks up where the first one left off, with Batman, Green Lantern, and Superman locked in a titanic power struggle. Green Lantern calls The Flash in for back up and Batman realizes there’s been a big misunderstanding. After a few more punches are thrown Batman manages to calm everyone down and they relocate to an abandoned paper mill to analyze one of the boxes Darkseid’s minions have left behind. Meanwhile, Vic Stone (the not-yet-Cyborg) confronts his father about missing his football game. His father gets angry and tells him that his sports prowess is nothing compared to the super humans that are emerging. Vic goes to leave but the boxes begin to show some activity and legions of Darkseid’s soldiers pour out, burning Vic horribly.

This issue definitely fixed the action to story ratio that was a little off last time. A great deal happened, in both story and action, but was kept at a good pace. I like the character they’re setting up for Green Lantern. It’s common canon that Hal Jordan is cocky, brash, and a hot head, but this is really the first time I’ve felt it. With Pre-52 Green Lantern most of his flaws had been worked out by the time I got to the comics, even though they still shone through on occasion. The other characters also have some good, discernible development as well. Batman is a tactician and, at least in this issue, peace keeper amongst the group. Flash is cautious, encyclopedic, and only wants justice for people who don’t get any. Superman’s a little off, at least in this one. We don’t really get much from him, other than him being a total badass in his fight with Batman and Green Lantern. I’m holding out that his infallible moral compass will surface in the coming issues, and his abilities as a leader within the JLA will as well.

The art by Jim Lee is just that, it’s Jim Lee. The panels are gorgeous, and there’s a two page spread inside that is just amazing in both detail and just the subject matter itself.

The end of the comic has something that threw both Michael Newton and I for a loop at first, a transcript of an interview between Amanda Waller and Steve Trevor about his crash landing on Paradise Island. Other than some insight into Wonder Woman, Aquaman, and Shazam that anyone not familiar with the characters would find useful it doesn’t really add much to the experience. What it does do, that I am extremely pumped for, is foreshadow the 53rd comic to the line up that has been announced. Geoff Johns will helm a Shazam book.

Back on point, this issue of DC’s flagship book was a step up from the already solid first issue. And it’s only going to get better from here.