COMICS FROM THE EDGE #6 - SUBSTITUTE 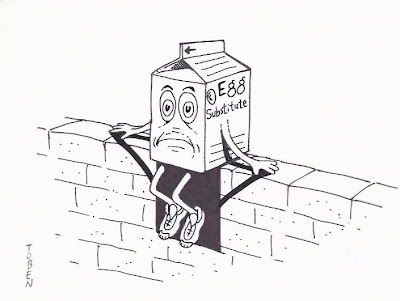 Comic by Bob Toben
Ramblings by TonyDoug Wright
I really enjoy Bob Toben's comics. This one in particular had me thinking about rock lyrics and the history of the Humpty Dumpty nursery rhyme. 'Substitute' by The Who and 'I Am The Walrus' by The Beatles were the two rock songs that popped into my head when I saw this comic.Why? Take a look at the lyrics below:
I'm a substitute for another guy - The Who
I am the eggman / They are the eggmen / I am the walrus - The Beatles
I'm a big fan of both bands and am a huge fan of rock music. I try to link everyday things to songs and this was fun for me.
Now let's take a look at the nursery rhyme itself. Humpty Dumpty origins can be traced back to the 17th century in England. Here is what is believed to be the original verse:
Humpty Dumpty sate on a wall,
Humpti Dumpti had a great fall;
Threescore men an threescore more,
Cannot place Humpty dumpty as he was before
Verse taken from Gammer Gurton's 'Garland or the Nursery Parnassus'  (1810)
Just as we see with today's version, here is no mention of Humpty Dumpty being an egg. Some believe that Humpty Dumpty was in fact a cannon used during the English Civil War. You can go here to read more about the legend. However, I am still looking for the first instance where he was portrayed as an egg. If you find anything then let me know in the comments section. Thanks!
Bob Toben wants me to share this Ricky Gervais clip with everyone. (NSFW language)