I continue to use conflict between Trent Reynolds and Frankie Paradise to keep the reader interested in the story. When you have moments that are dialogue heavy, then it is a good rule of thumb to have some sort of conflict to keep things interesting. Nobody wants a boring conversation. I also established the fact that Nick Hamilton is viewed as a snitch by Paradise. Why? I had ideas on Nick turning into a snitch after Danny Calhoun's death, and snitches get stitches in the criminal world. Adding the snitch element creates more danger for Nick because there may be other's out there that are angered by his snitching. Let's review page 32 below.

Paradise is pretty cocky in his underground bunker, and that is upsetting to Trent because he deals with all of the nonsense in the real world. I wanted to create a situation where you had the crime lord and his right-hand-man on different pages. That was a good bit of conflict that just doesn't keep the story interesting, but creates more problems for these characters. But I also created more conflict by having rival crime families causing trouble for Paradise. While Paradise has some enemies that are no longer an issue, Reynolds brings up some trouble from Juarez and Hong Kong. The names of those cities would give the reader an indication that these are some serious bad ass dudes. Let's review page 33 below. 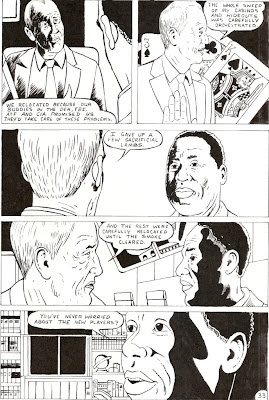 Paradise gives Nick Hamilton a hard time about being a snitch, but he seems to have no problem being a crime lord that works with law enforcement. The second panel of this page is something special because Kav added the cards to the background for a nice touch. I thought it was brilliant.

I wish I could write more today, folks, but this week has turned into one busy week. I'll see you next week as I talk more about The End of Paradise.