Tuesday means it's time for Kav and Tony to break down your favorite Superman comic books. This week, we continue a review of Superman #194 'The Death of Lois Lane'. This was published in 1967 and the writer was Otto Binder, pencils were done by Curt Swan, and the inker was George Klein. Did you miss part one and part two of this review? Click here to read part one. Click here to read part two. 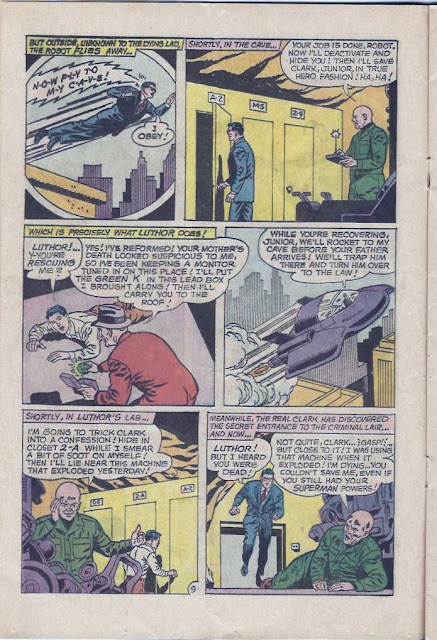 KAV: Check out Luthor's closet numbering system. Is this Luthor or Bizzaro Luthor??? His plan kicks into high gear with the most complicated twisted scenario ever scripted- but Luthor is the Orson Welles of acting and pulls it off easily.

TONY: I love how Luthor's rocket was able to easily land and take off from the apartment building without doing any damage. Also, I love how casually Luthor tells stupid-kid to jump into closet 2-A and the kid does it without arguing or questioning why closet 2-A. It would have been awesome if R. Kelly were in the other closet. Clark and Lois must have done one hell of a job telling their kid about how evil Luthor was and how he tried so many times to trick them with poorly devised schemes. 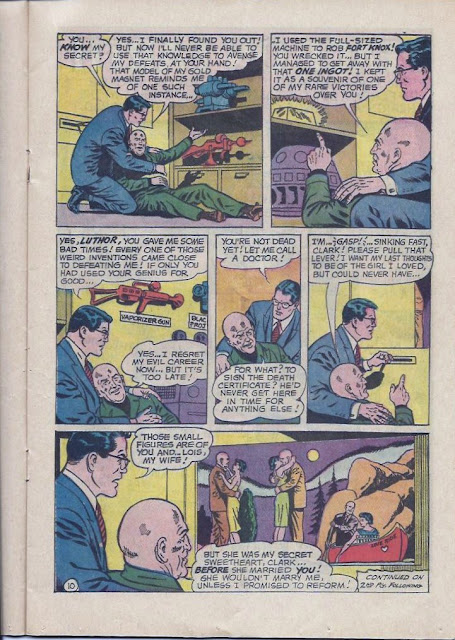 KAV: Here we have the typical dying scene where the dude dying doesn't need an MRI scan or X Rays or blood tests to determine his condition-no they're always medical Svengalis...Clark doesn't even doubt his snap diagnosis and doesn't call an ambulance....

TONY: Where is the Oscar for Luthor? That's quite the dinner theater performance. Hell, where is the Moron of the Year award for Clark? How could Clark believe that Luthor was dying? You know you have a dying man in the lair when he's covered in soot and lying on the floor and talking clearly. Nice. What's with the stupid model set? Luthor's supposed to be a genius who flies around in a rocket and all he has to show Lois' unfaithfulness is a crummy doll set. Sixth graders make better dioramas. 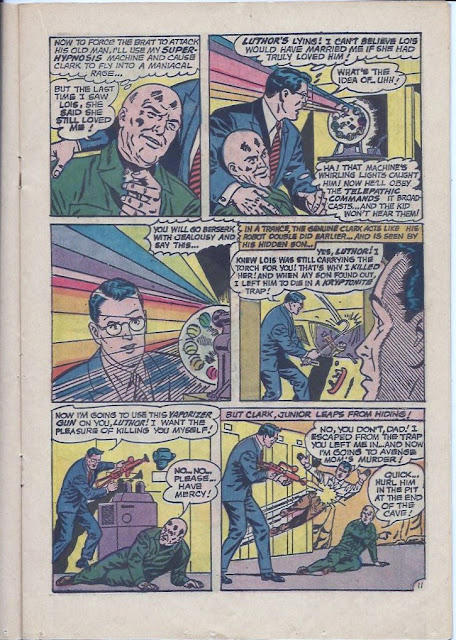 KAV: NOW LUTHOR'S HYPNOSIS MACHINE GIVES TELEPATHIC COMMANDS! He could have used it to take over the President but no, he's been saving it for just the right set of incidents to occur to have the utmost revenge on Stupidman! This is some lazy writing folks! 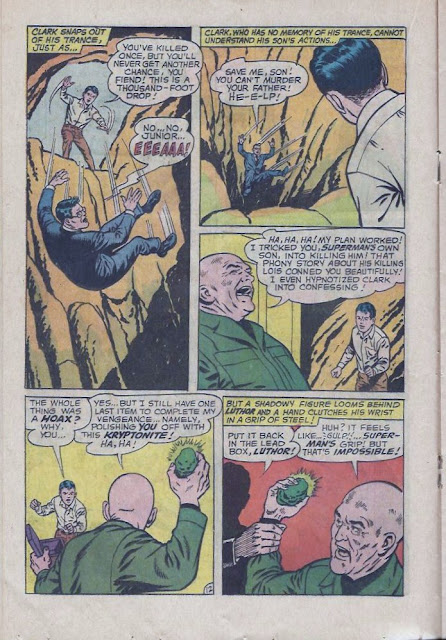 KAV: Ok Luthor is pretty stupid here-he just saw a boy who can shove the moon into the Earth kill his own father
and is laughing and boasting that it was all his plan! Luckily for him short bus Stupidboy is even stupider than him, and instead of vaporizing baldy with his eyeballs, walks right into the old pocketful of Kryptonite routine! Number one lesson for any super-son of mine would be, ok son-WHENEVER you see Luthor, X ray his pockets. WHEN not IF you see kryptonite, stay back, and use your heat vision to prod him towards the police station.

TONY: Bad guys always have the giant never-ending pit in their lair. 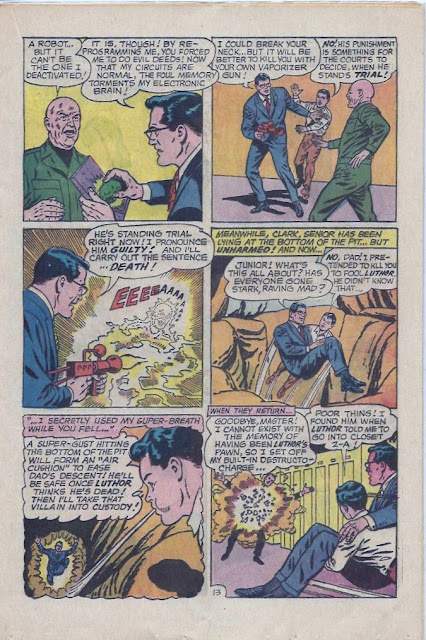 KAV: Now we see that a Superman robot, who is too un-self motivated enough to stop a bald madman from reprogramming him is a moral whiz and Socrates-like sacrificial reasoning being. WTF?

TONY: Oh my god this is some horrible writing. Super-kid uses his breath to cushion Clark's fall? The robot has a conscious and can commit suicide? Unbelievable. 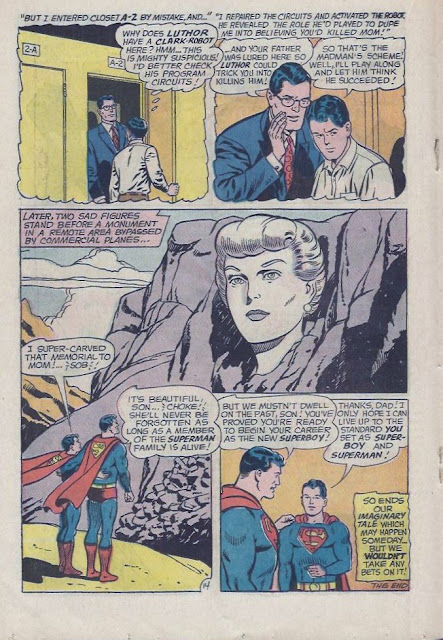 KAV: OK Tony calm your blood pressure-this is the last page. Told ya it was a doozy. PS I just realized-no member of the JUSTICE LEAGUE ever approached Clark and asked him what happened to his powers, etc? What a bunch of assholes, man.

TONY: I don't know who is the bigger asshole: The Justice League or the creative team behind this comic.


Kav and I will take some aspirin and return next week!