KAV & TONY BREAK IT DOWN: ACTION COMICS #305 - 'WHY SUPERMAN NEEDS A SECRET IDENTITY'

Yesterday, we introduced to you the first of the Kav & Tony Break It Down series, and as a special treat, we're providing you another edition by reviewing Action Comics #305 titled 'Why Superman Needs A Special Identity'.

Why are we breaking down some Golden Age and Silver Age comics? While some of these comics have delivered some classic tales, they have also given us some WTF moments where we must examine the madness of these stories. We understand that comics were generally written for a younger audience, but even young readers were/are pretty sharp at discovering some holes in the story.

If you read yesterday's blog entry, you will discover that I'm not a fan of Superman. It's nothing personal against the Man of Steel, but I feel that writers have made him so powerful and indestructible that the end result is a pretty 'blah' character missing Batman's edge and the Hulk's anger management issues.

Lets break down this comic. Be sure to click the image to read the page. 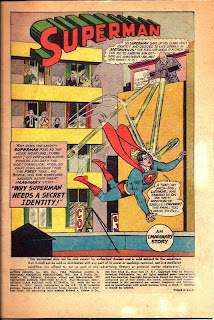 Kav: I've always wondered about kryptonite because sometimes it acts instantly and sometimes not. The shells are bouncing off of him, so won't he be OK when he gets out of range?
Tony: I don't know where to begin with this page. We have Lex Luthor waiting for Superman with a giant canon that fires useless kryptonite shells. Also, if Lex knows where Superman lives then why not pull some surprise attack instead of waiting for the guy to fly out the window? Lex get's an "A" for effort but an "F" in the weapons department. Mastermind? I think not. Let's move on to Superman. This guy is a real dope for putting innocent people in danger by living in an apartment building where his enemies can easily attack. I can't imagine the renters insurance one would pay in Metropolis because they live in Superman's building. It's amazing that Superman doesn't look out his window before flying. "Oh, there's a guy with a canon outside my window. I wonder if he's going to shoot me."
Page 2 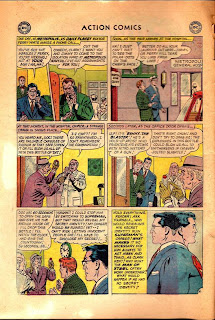 Kav: The crook threatens them with a bottle of TNT?! As far as I know, this is an empty threat because TNT in a bottle is pretty harmless. Things would be different if it was nitroglycerine. Superman groans that he's helpless in his Clark guise, but apparently he's forgotten all of the clever things he's done before in his Clark guise to get himself out of trouble.
Tony: Did the hospital not have someone working security? Who lets a guy named Benny the Blaster into the building? It's like having Pete the Pedophile walking into a school. Why was Clark scared? He should have known that Benny the Blaster's threat was a lie because who would be willing to blow themselves up over some radium?
Page 3 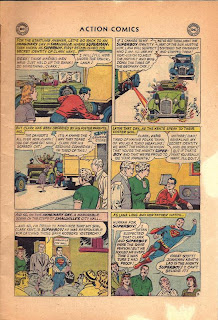 Kav: Clark uses heat vision to instantly melt the asphalt which instantly halts the car. I don't see how this is possible. I've driven on newly poured hot asphalt and my car did not 'halt', but instead, a bunch of tiny rocks rattled in my undercarriage. The Kent's were embarrassed, so they made Clark reveal his identity because they don't want a loser for a son. A less extreme solution would be the Kent's asking Clark to act less scared and more tough. There are plenty of tough guys and nobody thinks they're Superman. It's obvious to act meek if you're actually Superman but more sly to act aggressive.
Tony: It's interesting how the sun magically melted one small section of the pavement. Was that a solar flare or some activity from a super volcano? If I were Clark in this panel, I'd have a different response to Ma and Pa Kent when they told me to stop being timid. I'd have used the heat vision to melt Ma Kent and be like, "You're not my real dad, John. Go make me dinner before you get extra crispy like your old woman."
TO BE CONTINUED...
- August 12, 2011