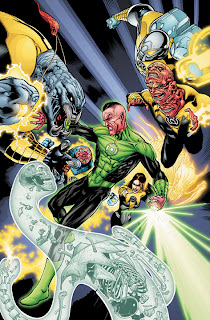 When last we left our fallen Lantern, Hal Jordan, his life was generally in shambles and he’d just been confronted by his long time nemesis Sinestro, who is now in possession of a Green Lantern Ring and is the Green Lantern of Sector 2814. Jordan was told that if he wants his ring back, then he must do exactly as Sinestro says. I made my disappointment in the first issue no secret, but this issue rewards my faith that it would get better. Hal decides the best course of action is to attack Sinestro by, you guessed it, tackling him out a window. Sinestro does some pretty impressive talking down to Hal before giving him a Green Lantern ring that he (Sinestro) can turn on and off at will. When Hal turns his attention to a bridge that was destroyed by something falling from the sky, Sinestro decides it’s time he learn a lesson. Cutting the power to Hal’s ring he not only stops him from saving the people, but then saves EVERYONE and rebuilds the bridge himself. Then he chastises Hal for having a ring for so long and always thinking so small, for not working to better the WHOLE planet, like he did for his planet before subsequently ruling it like a dictator. It turns out the thing that destroyed the bridge was a member of the Sinestro Corps, looking to kill Sinestro so as to take his place as leader, and Sinestro kills him. Then he tells Hal that the Sinestro Corps have enslaved his planet and that Hal is going to help him destroy them.

I’m really digging the story, and Sinestro’s long talking sprees make for an interesting philosophical read and musing on Green Lantern in general. I like the idea of Sinestro destroying his corps for giving in to their “sadistic urges” and running wild. It evokes a whole Noah’s Flood vibe of cleansing your creation from existence. I’m wildly confused as to if the ring he gave Hal is a light construct of a ring that can itself create constructs, or if it is the whole deputization protocols we saw in Blackest Night.

The art by Mahnke is pretty solid in this, I’m still digging it, and I was really amused by the three faced alien on the cover. It's the alien that brings up my only negative for the art. The cover has absolutely NOTHING to do with the story inside. I know that covers rarely, if ever, depict a panel in the book, but this cover doesn’t even show the alien they are fighting. It shows four Sinestro Corps members fighting Sinestro in space. But that doesn’t ever happen. I don’t know but it just sort of sits oddly with me.

Overall a good read and I’m looking forward to more from this story. I think when it’s done Hal and Sinestro are going to have more of a grudging respect for each other and that they will probably kick ass as a Sinestro Corps Buster team.