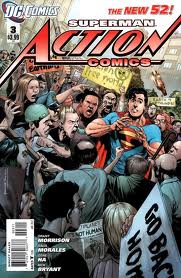 Written by Grant Morrison
Art by Rags Morales, Gene Ha, and Rick Bryant
Action Comics #3 is, well for the sake of redundancy, the third installment of the Action Comics series following Superman's early adventures. In the past two issues, I have been very reluctant to jump on board with this Superman, but let's just say I'm working on it, and my psychiatrist says it's because I suffer from Assholiosis. This is a condition that makes me resent any drastic changes to my life that I consider balanced.
That being said, this issue felt much better to me.  Here we have a some back-story that all of us suffering from Assholiosis are familiar with; the taking of Kandor by the incredibly advanced Terminator, Brainiac.  I loved the art and the aristocratic society shown in this back-story, however I felt a little disappointed by Rags attempt to make Jor-El look like a cross between Superman and Ultimate Captain Mar-Vell, and a very Prehistoric Krypto, if in fact that is who it is supposed to be.
Not only will the Kree Empire be pissed, but so is the Covenant!

My superior puns aside, the art was really well received by my neural networks allowing my condition to be bypassed.  This history has not varied much from the Geoff Johns Superman run where we have Braniac as a archivist of civilizations lost throughout the galaxy, an idea I am quite fond of!
Back to reality in the sense that we are still in the past where Superman is not so super, but is an aspiring superhero/reporter living in a ridiculously small one-room apartment that does not even have a kitchen.  We see at this point that the entire Kandor sequence was a dream that Clark was having and it gets interrupted by his landlord and some cops clearly on the take from Mr. Glenmorgan.  It appears that they are searching his room, with no warrant, in order to find some dirt on Kent for his reports on Mr. Glenmorgans “dishonest” business practices.
For reasons yet to be explored, Clark's identity is revealed after the cops leave and his landlord hands him back his costume.  I'm not sure the point of this sequence other than to not let us forget that Clark has a run-in coming with Glenmorgan that stretches into the Superman title.  I was lukewarm to the idea that cops, even on that take would just barge in, no warrant, and clearly without discretion. Curse you, assholiosis!


We also discover that Clark's hard-ass attempt at coercing Glenmorgan into a confession not only alienated him, but the people are completely against Clark because Glenmorgan blasts him publicly for his bullying tactics.  If you didn't see that coming in issue one, then I praise you for having virgin, unblemished eyes that can still see the wonder in the rampant minor fails that are going on throughout this title.  I so want to go into this but I'll bite my tongue and perhaps write another review about why this title tickles my medulla oblongata in the wrong ways.
The ending is just as bad because it shows Lex being a completely oblivious, miscalculating mastermind he is known to be. However, Brainiac sends a part of his conscious into Sargent Corbin, who is currently in a suit for the “Steel Soldier” program that looks entirely to much like Apocalypse.

My medical condition aside, I enjoyed the issue, it gave some depth to Clark and inserted some plots that a new reader will enjoy, even if to me, overdone.  Ever since Geoff Johns rewrote Brainiac I've been a fan, and it appears Grant Morrison is sticking to this theme, which considering all the other blunders, is a blessing.
3.0 out of 5.0 but I'll keep reading only because I'm a glutton for punishment.
Bret Kinsey is a contributing writer at Champion City Comics.
- November 08, 2011