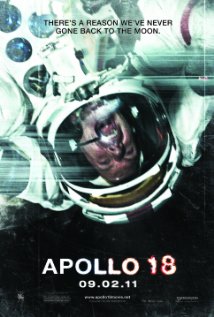 I could say spoiler alert but there's nothing to spoil here so read on.

Ok another suckfest from Hollywood. This film suffers from the fatal flaw of the passive protagonist. He does nothing to try to get out of his predicament, merely repeating over and over, 'Houston can you hear me? Liberty do you copy" etc etc ad nauseum. A third of this movie seems to be the doomed astronauts shouting, "HOUSTON DO YOU COPY? LIBERTY DO YOU COPY?" Not the stuff of interesting films, boys. Don't any screenwriters read books on screenwriting? The passive protagonist is the death sentence for drama, guys.

Anyway, this movie is about a secret 18th mission to the moon. It's kinda like Apollo 13 meets Cloverfield meets Alien. These are the lost tapes. Dudes go on a secret mission to the moon to install some sort of transmitters to spy on the Russians or something. The film doesn't make it any clearer than that.

So two astronauts discover a Russian lander close to where they landed, which looks like a bunch of hobos have been living in it and who stripped all the wiring out. But the pod still functions for some reason. Go figure. Maybe the Russians discovered some wireless method of power transmission. So then they find a dead cosmonaut in a crater.

Back at the lunar excursion module (LEM), a dude discovers that some sort of space crab has entered his body in true ALIEN fashion. Apparently the space rocks transform into space crabs that infect you then make your eyes bloodshot and drive you crazy. Go figure. Space crabs, Hollywood? That's the best you could come up with?

So at first the guys on the moon are bouncing around in lunar gravity. Then later, I guess due to budget cuts or a sleepy director or both, the gravity becomes Earth's, reminding everyone that this is filmed on EARTH in a SOUNDSTAGE. Way to kill the willing suspension of disbelief guys.

The suckfest continues as one dude gets dragged into a crater by space crabs (I'm not s******g you) and other dude heads for the Russian LEM for Oxygen. He contacts the Department of Defense (DOD) on Earth via a VERY quick patch through to the Russian Space Agency. Go figure. DOD dude tells him that with the 'infection' they can't come rescue him. No mention is made of the fact that such a rescue would be impossible even IF they had a Saturn V waiting to blast off with an Apollo craft on it just lying around, the four days it would take to reach the moon would be about three and a half more days oxygen than dude has, also it is IMPOSSIBLE to land in the same spot on the moon within say a hundred miles. But the director didn't wake up long enough to get such info from NASA so the movie breezes right along with stupidity piled upon stupidity.

I'm just glad I had a $1 credit at the Blockbuster kiosk so didn't have to waste the full $3 on this suckfest. But I'm tempted to call customer service and lie and say the DVD was scratched to get a refund. I can't bring myself to do that, but I did leave a sticky note on the kiosk stating 'Apollo 18 sucks. Bad'. If I can prevent one person from spending money to be tortured, that's practically like saving someone's life, I figure.

Then there's the touching scene where the doomed astronaut listens to his son's tape recorded message for him over and over. Only it's not touching. Because by now everyone hates this movie and couldn't care less about the actor, I mean astronaut stranded on the soundstage, I mean moon. Then they do the old horror movie cliche where the dead guy's not dead - the deranged astronaut attacks the Russian LEM with a hammer. (Ironic) But then the space crabs chew through his helmet and his face explodes. Why they hadn't chewed through his faceplate back at the crater when they were swarming on him is a mystery. Wait no it's not-it's because the director is a FORMULA DIRECTOR and the dead not dead deranged guy comeback was a MUST for this artistic genius of originality.

So then dude straps himself in because suddenly he reads Russian and has been FULLY TRAINED to operate Russian spacecraft! I'm not s*****g you! They went there! So they were too cheap to show the Russian LEM blasting off so there are no exterior shots of this at all, just happy dude strapped in his astro-chair. It's a sad day for science fiction films when Lost in Space is twice as realistic. (and I'm talking about the TV show not the movie) DANGER WILL ROBINSON! DANGER!

And how are you supposed to admire or care about a cowardly protagonist? He knows he's been exposed to the space crab disease, and is fully aware that this could be a human ending contagion, but damn it HE WANTS TO GO HOME! NASA-well, what used to be NASA when we had a space program, should be pissed at the depiction of astronauts as cowardly.

The ending is dumber than dumb-a lot of yelling and a crash. That's it. That's the movie.

From henceforth I call for this movie to be referred to as Plan 10 From Outer Space.


A. Kaviraj is an artist and writer at Champion City Comics. His works include Dr Death vs The Vampire, Doctor Death vs The Zombie, and The End of Paradise.
- December 31, 2011