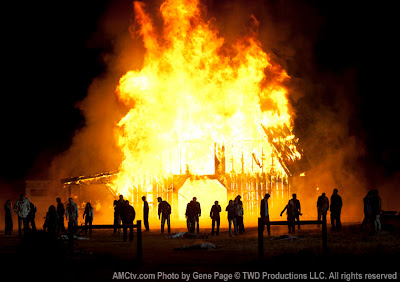 The second season is over and we had ourselves a real barn burner. I wish AMC would have hired former ABC sportscaster, Keith Jackson, to provide some commentary during the finale. When Jimmy was eaten alive, we'd have Jackson say, "Whoa, Nellie!" That would have been brilliant. Overall, the finale was a good ol' fashioned gunfight against a horde of walkers. I really enjoyed how the writers were able to get the walkers from Atlanta to Herschel's farm. The mysterious helicopter was the culprit and perhaps we will know more about the people who are flying around Hot-lanta.  The walkers then made their way to the farm area and the sound of Carl's gun caught their attention. These events led to the end of Herschel's farm. Take it away,Talking Heads!


The battle led to the majority of the group going their separate ways to flee the chaos. However, the group was broken up momentarily but reunited on the highway. Andrea was left behind but was saved by a kitana wielding figure who had two armless walkers on chains. The fanboys and fangirls know that this character is Michonne. Rick and the survivors decided to get out of Dodge but gas trouble stranded them overnight. While camped out, Rick gave the group an ultimatum, and in the background we saw the prison that will play a key role in season three. I'm intrigued to see how things will go for the group with the evil one known as The Governor. Frank Darabont, will you ever not be affiliated with a project that does not have a prison theme? 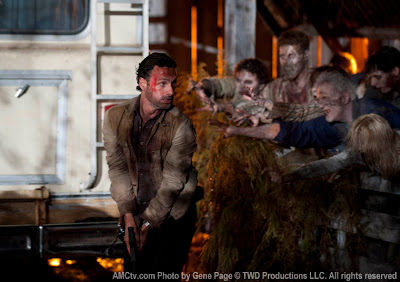 What did I like about the finale? The gunfight. It was fantastic, pulse-pounding, and had me on the edge of my seat. Although the group had to flee, they did get together at the end for a brief happy reunion. Also, I loved how Rick turned into angry Rick. The group needed a strong leader, and Rick stepped up to the plate. He gave them the ultimatum at the end and nobody decided to cross the boss. Well, not yet. I was also thankful that T-Dog did not die. Way to survive,T-Dog.

What did I not like about the finale? Lori's attitude. Excuse me? Lady, you wanted Shane out of the picture, so Rick did what he had to do, and you're pissed? Shane was crazy, yo. The fool was going to get capped eventually.