WEBCOMICOGRAPHY: THE END OF PARADISE PAGES 6 TO 10

Webcomicography is a weekly article from Champion City Comics that goes behind the scenes of our webcomics to give you the complete story. This week we are starting part two of our series for The End of Paradise, a crime noir tale of revenge. Did you miss part one and two of the story? Click here to read party one and click here to read part two.

OK, pages one to five established the characters of Nick Hamilton and Marshall Jackson. Nick is buying weapons and a car from Marshall and is not interested in sharing his plan on why he needs the weapons and car. Marshall easily puts two and two together and tells Nick he is on a suicide mission to avenge the death of his friend, Danny Calhoun. Nick and Marshall exchange words and Nick storms out of the motel room to search for a car. 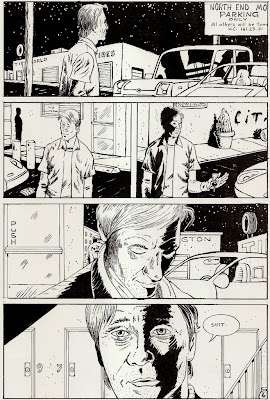 Five simple panels show the reader that Nick has no idea what car Marshall got for him. I wanted Nick to be rusty because he had been away from New Ravenwood for over a decade. At the time, I didn't have a plan together on why Nick had been away from the city. Part of me thought that he had gotten out of the game and moved away to start a new life. I thought about him having something of a family, but they get killed and the killers are linked to Frankie Paradise. Looking back, I should have had a better developed plan of action, but I thought I could make it up as I went along. Let's continue on to page seven, which is below. 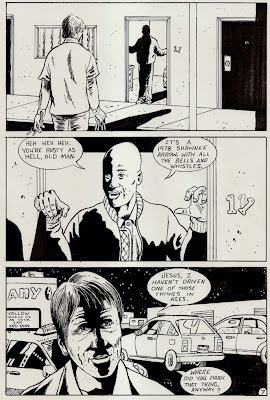 Marshall tells Nick he is driving a Shawnee Arrow. I decided to create a fictitious car company just for fun. The car company is named after Shawnee High School, which is located near my hometown of Springfield, Ohio. The model 'Arrow' is named after the mascot of Tecumseh High School, which is in New Carlisle, Ohio. Let's review page eight below. 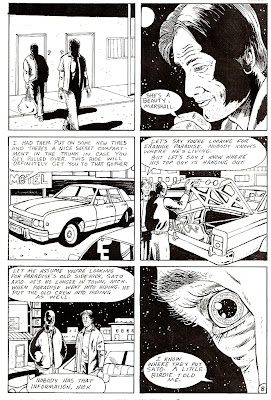 Page eight shows how Marshall took care of the Shawnee Arrow for Nick's mission. Also, Nick starts to drop his shields and reveals that he might be on a mission to get Frankie Paradise. However, Frankie Paradise went into hiding and so did his top crime lords. Nick is looking for the number one crime lord, Sato Akio, so that Nick can get Paradise's hiding location from Akio. Marshall mentions that Sato is just as tough to find as paradise, but Nick mentions "a little birdie" told him everything. I know Kav is highly critical of his own work, but I still love that last image of Nick's eye. Let's examine page nine. 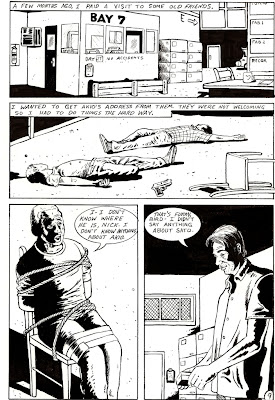 This is the first of many flashback sequences in The End of Paradise. Looking back, I should have shown Nick taking out the two guys, but at the time I didn't think it was necessary. However, it was important to establish Nick as a bad ass. The guy he has tied to the chair is Ronnie Bird. I named him Bird because I was watching The Wire at the time and Omar had done his famous line of, 'What up, Bird?' I decided to make Bird the weak link in the world of Frankie Paradise. 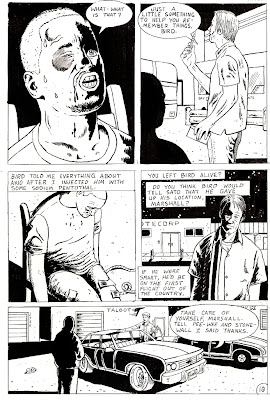 As a reader and writer of comic books, I think torture is overused and unnecessarily used at times. Nick's no dummy and he uses sodium pentothol (truth serum) to get the information he needs from Bird. Although Nick took out the two guards, he does not kill Bird. Why? Bird knows he gave away Akio's location and there is no way he'd fess up to that major mistake.

Ten pages have been reviewed for Webcomicography and next week we will review pages 11 to 15.

TonyDoug Wright is the owner and editor of Champion City Comics. His webcomics include Dr Death vs The Zombie, The End of Paradise, The Red Devil, and Day 165.
- July 27, 2012