A. Kaviraj is an artist for Champion City Comics and plays a key role in the development of our webcomics. His comic book knowledge runs deep and recently he submitted this list of rules for superhero comics. As you know, all lists are subjective, so please enjoy!

1. Whenever two superheroes meet for the first time they will fight. Also, they will be equally matched for the duration of the flight.

2. No amount of ninjas can ever defeat a superhero. Or anyone, really.

3. No matter how many ninjas you defeat, there are always twice as many left. 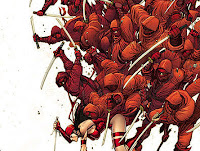 4. No matter how many times Lex Luthor sneaks a piece of kryptonite on Superman, Superman still never learns to do a full body scan from a mile away with his x-ray vision.

5. No one can ever recognize voices in superhero comics and say things like, "Peter? Is that you? That IS you!" to Spiderman.

6. Superheroes are stupid and always have the same friends with both identities. Luckily those friends are even stupider and something like a pair of glasses will make their best friend unrecognizable.

8. A group of superheroes has the same effectiveness as a lone superhero, since they both fight with the same menaces and defeat them, either alone, or as a group.

9. A superhero can somehow fit superhero boots, which are larger than his shoes, under his shoes while in his secret identity.


10. A burst of radiation will give you super powers, unlike the real world, where it gives you tumors.