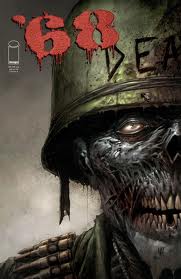 
Warning: there are a few spoilers in this review.

I am a comic book reader that is willing to take risks on titles simply based on their cover. As a historian, a fan of war comics, and a fan of zombie comics, I felt I could not go wrong with '68 #4 by Image Comics. The cover featured an American GI turned zombie, which seemed good enough for me. Titled 'Crossfire Hurricane', this issue by Mark Kidwell featuring the artwork of Nat Jones is an action-packed journey into the jungles of Vietnam.

It is my duty to inform you that I was not able to find copies of the first three issues of '68 at my local comic book store. I wanted to be thorough in my review, but zombie mania has struck once again. While reading this issue I was able to get the idea of this story, which is the world experiences a zombie outbreak in 1968. I'll give the creative team plenty of props for coming up with a cool zombie story set during one of the most tumultuous years in our country's history.

'Crossfire Hurricane' follows an American military unit deep "in the shit" of the Vietnamese jungle. Zombies are everywhere and the military has no choice but to join forces with the communist North Vietnamese forces to fight the zombie hordes. However, the union of these two military powers is no match for zombies. The Americans are desperate for help and are willing to make any sacrifices necessary for winning the war against the zombies. Joining the American military, is a CIA operative who seems to know the cause of the outbreak, but has no intentions of sharing his knowledge.

As far as the story goes, it is pretty much a non-stop action story that has more explosions and decapitations than the French Revolution. Kidwell keeps the reader's attention and for me, I was never bored. This is typical horror gore, so this issue is not for the squeamish.

The artwork of Nat Jones was pretty good overall. He was given an action-packed script and did a good job of portraying the horrors of a zombie apocalypse. Jones had plenty of gory panels to work with and I thought he did an excellent job. The battle scenes and bombing of Saigon are very nice. Also, I encourage you to check out the variant covers he developed for '68 because they feature some zombie versions of pop culture personalities like Hendrix and Nixon.

Overall, this is a must-read for zombie fans. Think of this series as George Romero invades Apocalypse Now.

TonyDoug Wright is the owner and editor for Champion City Comics. He likes zombie stories too.
- October 28, 2011