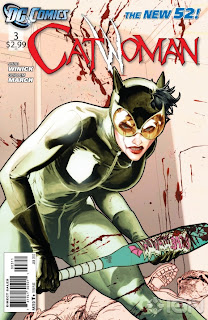 Writer: Judd Winnick
Art: Guillem March
The moral of the Catwoman reboot, and that’s a loose term in the scheme of things, is that this kitten has claws, a fact not lost here in issue #3.
The previous two issues from the same creative team of Winnick and March showed us that A) Selina still fans a hot-burning flame for Batman, and B) she digs pink lingerie. Other than showing us that the ol’ girl is up to her old tricks while pissing off some (most) of Gotham’s most nefarious ne’er-do-wells, the only new info we’re privy to is meeting Selina’s fence (that’s someone who buys stolen goods from thieves—the booster—in exchange for split profits, FYI.) If you read last month’s issue, you know that the chick was DOA when Catwoman paid a visit to her dear friend, courtesy of osteo-thug Bone, a victim of Selina’s who wants his valuables returned.
Issue #3 reminds us that Hell hath no fury like a woman scorned, doubly so if said woman is ultra-agile, a crackerjack with a bullwhip and you just put a bullet in her BFF. Those that read these prattles of mine know I’m not much on spoiling a good read so the main points to take from the book if you’re kicking around picking it up is that Catwoman’s mad, she kisses Batman some more and no, seriously— she’s REALLY pissed.
Catwoman’s my absolute favorite female comic character. I loved the 90s series, bought the whole run, and here with the New 52 Catwoman, can’t say I’m disappointed. Winnick’s Selina knows she’s bad and doesn’t have a problem with it but she also clearly defines an un-crossable, moral line. Girls gotta do what a girls gotta do, especially when you inhabit a world of Kryptonian and Amazonian demigods and dudes that conjure giant green flyswatters from a ring, so Selina feels she does what she needs to in order to compete. Winnick gives her childhood vulnerability tempered with a mean streak and the characterization is nigh on perfect.
You know how some artists are immediately associated with a character—Neal Adams’ Batman or Romita, Jr.’s Spider-Man, for instance? That’s how I categorize March’s work on Catwoman. The pencils are polished. I thought the same when he was on Gotham City Sirens and I hope DC’s brass pays him well ‘cause it’d be a shame to see him leave. Like Old Spice, anything less would be uncivilized.
This is one of my favorite titles of the launch and the way things are going, after having dropped two of the seven from my pulls, it’ll stay that way.