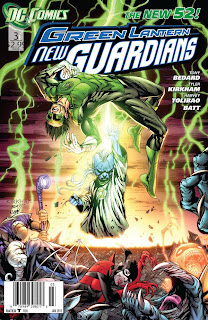 Written by:  Tony Bedard
Pencils:  Harvey Tolibao
Pencils:  Tyler Kirkham
Inks:  Matt Banning
It’s that time again Lanterns, grab your power rings, red, yellow, white, green, blue, orange, violet, indigo, and not a chance in hell for a black ring, and lets review this title that is delving far deeper into the Green Lantern universe than Chris Hanson at a NAMBLA rally.  (If you don’t get that, it’s probably best.)  You can read Mike “Simply Fabulous” Knolls issue one review here. and issue two, here.
So here we have Kyle Rayner, once again being portrayed as the messianic Lantern.  Except now, every ring, except the black, has chosen him to be it’s champion. Confused, and rightfully so, Kyle becomes the object of the irrational affections of the other colored lanterns.  They are none to pleased that he has these rings and want them back, at any cost.  Back in issue two Saint Walker comes to the rescue of Kyle and aids him in escaping so he can find out why the rings have chosen him from the lovable smurf guardian Ganthet.  Everyone knows if the Green and Indigo Team up it is instantly serious business so they are able to make the getaway pretty easy at the point.  Having fled back to Oa, Kyle heads down to see Ganthet, leaving Saint Walker in orbit because Oa is a No Fly Zone for different colored lanterns.  Proving time and time again that the Guardians are not only terrorists, they are also adamant racists.  But what can you expect from nerdy immortals with short man syndrome?

Come at us, bro!
After discovering that the Guardians have lobotomized Ganthet, Kyle becomes enraged and finds himself the proud bearer of not only the green ring, but all of the rings on every finger, except for the black ring.  (This absence of the black is worrying me.)  So now we have Kyle Raynor bearing all colors and blasting out all the emotions in one raw display of power.  The best live action I can think of to describe his anger is this epic portrayal of Rampo.  The scene I’m referring to can be found at 3:48, and it is seriously worth it.
http://www.youtube.com/watch?feature=player_detailpage&v=8n1hKQULa9Y
Now that you have a sense of how bad ass Kyle Raynor is you won’t be surprised at all when he faints because he can’t handle the power. 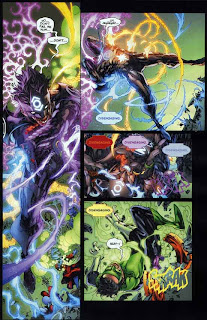 Fail.
The guardians reprimand him quickly, comparing him to the power hunger of Krona, and Ganthet moves in to reclaim the ring.  At least he thought he was going to, the ring shock Ganthet and refused to be removed.  This is a sweet revelation, because while I enjoy ribbing these comic books for all I’m worth, I actually love these issues.  Not only do we get to enjoy the Lanterns, but there is another huge story coming up on the horizon that is going to concern the Lanterns.  I’m personally wondering if the Black Lanterns absence has anything to do with this relaunch, perhaps a new Blackest Night?  We all know the Black Hand is still out there fondling himself in crypts, so there’s going to be a return, and there’s no way it will be a small one.  I’m enjoying where all the Lantern issues are going, the creative talent behind all this (Geoff Johns)  is adding more and more depth to the powers that these ring bearers control, and opening up a doorway to many many more stories that I will love to sink my teeth into.  This arc alone bears some compelling ones.
Why is Kyle Raynor still acting like a wuss?  He’s like a sad version of the Thing. 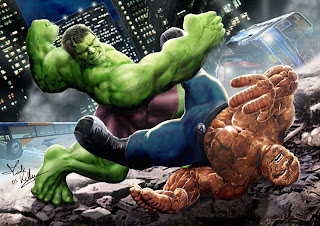 It’s Clobberin....oh wait, not it’s not.
Every time he has a moment to be awesome he trips it up somehow or is unable to bear the burden.  I hate to say it, but with someone who has so much affinity to the cosmic color scheme he really is lacking.  Larfleeze finally returns and proves once again the he is the most underrated Ring bearer in the DC Universe.  His ring constructs sentient ring bearers on it’s own, while still maintain the entirety of the entire Orange Lantern Corps power with just one Bearer.  Don’t take lightly that Lex Luthor wants that ring.  That alone should solidify his significance.
The art was enjoyable, and the writing is getting better and keeping my attention.  I’m anxious to see where this goes.  I rarely give perfect scores, and this ones no exception, but I will say it’s definitely worth the read.
Verdict: 4.0 outta 5.0
Bret Kinsey is a contributing author at Champion City Comics, in his spare time he enjoys live action Pokemon.
- November 28, 2011