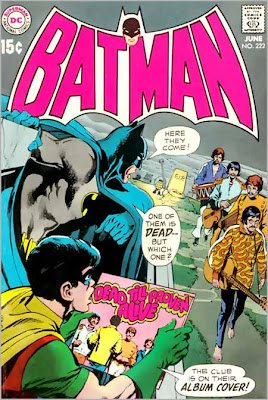 By TonyDoug Wright and A. Kaviraj.

A. 'Kav' Kaviraj sent me an email with this image attached and we both decided it would be a great idea for Kav and I to have a weekly column dedicated to classic comic book covers.

WHAT YOU NEED TO KNOW: Rock fans have discovered via album clues that Saul Cartwright, a member of The Oliver Twists, died and was replaced by an impostor. For some stupid reason, Batman and Robin need to solve this mystery. However, Batman and Robin discover Saul is the real Saul, but the rest of the band died in a plane crash. Saul replaced the others with look-alikes and the mystery is solved.

THE OLIVER TWISTS? I THOUGHT THE BEATLES WERE ON THE COVER. Yes, the band on the cover of the comic is obviously The Beatles, but copyright and trademark issues forced the powers-that-be at DC to come up with The Oliver Twists.

DOES THIS HAVE TO DO WITH THE 'PAUL IS DEAD' MYTH? Yes, you big dummy.

KAV, TELL THESE GOOD KIDS MORE ABOUT THE 'PAUL IS DEAD' MYTH. A student at Drake University in Iowa published an article in the student paper about the death of Paul McCartney. The student used clues in songs like 'Revolution #9' to prove his point. Also, on the cover of Abbey Road the license plate of the car is '28 if'...Paul would be 28 IF he was alive. Also Paul was walking across the street barefoot, which is how people are buried in Britain allegedly. DC Comics was quick to capitalize on the craze with this great Neal Adams Batman cover. It cracks me up that the cover indicates The Beatles took their guitars with them to dig a grave. Also George, not Ringo, is carrying a drum. Yeah, drummers always carry a snare drum with them.

A. Kaviraj is an artist and writer at Champion City Comics. His works include Dr Death vs The Vampire, Doctor Death vs The Zombie, and The End of Paradise.
- March 27, 2012