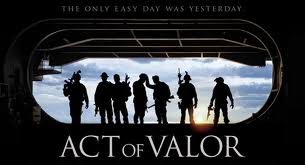 This movie should be used in film school as an example of why movies using non-actors will always suck. The producers et al thought, 'Hey! Let's do a movie about the Navy Seals but we'll use REAL Navy SEALs! Genius!' The thought, 'Hey! Navy SEALs can't act' never entered their craniums. So there's bad acting in this one-LOTS of bad acting.

The dialogue is stiff and about what you would expect when non-actors make a movie. There are no natural pauses in the dialogue-just rapid fire delivery like they're reading a teleprompter. Even one acting class would have brought them up to speed on this but no, they didn't need acting classes, they're NAVY SEALS! It's also loaded up on the expositional dialogue and the voice over explanations telling us over and over that 'these men are more than brothers-you have to trust them with your life' blah blah blah ad nauseum.

Combine that with the touching home scenes, barbeques, bonfires, surfing blah blah blah and of course you get BLAH BLAH BLAH! The wives are relegated to subordinate background dressing in this one. They are given no humanizing characteristics WHATSOEVER-just cardboard cutouts saying: HERE ARE THE WIVES AND THIS IS THE FAMILY AND YOU KNOW THEY CARE ABOUT THEM BECAUSE THEY JUST TOLD YOU SO.

On missions they blather on and on about 'getting home' and 'making it home' to these lifeless wives/children. Yawn. They actually do the lame thing where each SEAL is introduced with background info etc. How amateurish is THAT? Answer: VERY.

OK, so it's the terrorist mastermind they're after. Yawn. He masterminds a bombing of kids at an ice cream truck. No subtlety in this one, no, they whack you over the head with the plot like a hammer. Ok I tortured the predicate or something with that sentence but you know what I mean. So the CIA agent's girlfriend/ally gets captured and tortured in a basement. The makeup of her swollen face is like something you would get in a Halloween store-the flesh tones don't even match. Damn am I pissed I spent $2 to rent this pile of dung-but what was I thinking???? I knew it was non-actors. I deserve this. This is truly like a movie that you and your buddies would put together over the weekend, only worse. I may have to proclaim this movie even worse than the craptacular In Time...stay tuned. We'll see.

The cameraman also focuses in periodically on random shots like a spiderweb. Why, I don't know, and NEITHER DOES HE! (Or she). DUMB. If you're determined to watch this movie be prepared for lots of "Whiplash this is Raven Over". Hearkens back to the sucky Apollo 18 and the ubiquitous, "Houston do you copy? Liberty do you read me?", which took up about half that movie's dialogue. Hold on I have to go hurl.

Ok I'm back. Then there's the scene where they go underwater to creep up on the bad guys. Only problem is when they surface, they're not even breathing hard. I don't care if you are a Navy SEAL-when your lungs get starved for oxygen, you come up breathing hard! This is common sense guys. Reminds me of those movies supposedly showing a cold clime like Antarctica (see The Thing) where no one's breath comes out fogged. Reminds me of a lot of things, actually, bad high school plays, Wet Hot American Summer with Jeanine Garofolo, Plan 9 from Outer Space... the list goes on and on.

The one positive thing I will say about this movie is it shows actual SEAL tactics. But imagine if they had done that using actual actors? What a waste. PS showing actual tactics does not substitute for having an actual plot. That's called a documentary. Then they get chased in trucks by the bad guys and take one truck out with a rocket launcher. But then I guess they forgot they had a rocket launcher because they get in a rifle fight with the other bad guy trucks with ineffectual results.

According to this movie, SEALs don't shoot so good under pressure. If I was a Navy SEAL I'd be pissed at this depiction and go hands on with the director. Idiots: USE THE FREAKIN ROCKET LAUNCHER! Criminy.

Then the touching scene where Mikey almost dies, accompanied by the standard 'dying hero' music....so touching...only it's NOT. PS whoever was in charge of continuity should probably be drawn and quartered. Or at least halved. The hostage chick's wounds/blood come and go and change so often it's clear she was cleaned up between takes. Did they think we wouldn't notice? I noticed! what a clusterf*** this movie is! I might not even be able to give it any stars-I might have to just use planets instead. Hey, don't shoot the messenger-I'm just doin my job amigo.

The worst actor in this suckfest is the chief guy with the beard. He rattles off his lines like they're nailed to his forehead. Natural pauses, guys!!!!!!! Didn't the director notice this??? Some director, man-he couldn't direct someone to the nearest bathroom. Ed Wood leaves him in the dust! Then we have the touching scene where the guy jumps on a grenade to save his buddies. Only it's such an obvious set-up to show how loyal these guys are to each other that it's not very touching. Predictable, maybe, but not touching. Of course it's the guy with the new baby on the way, which has been mentioned repeatedly and so which we knew was coming. Like the guy in the war movie that keeps showing the pic of his fiance back home- you always know that guy is TOAST. It's one of the rules of war movies and of course this film certainly doesn't want to break any rules. Chain of command-you know.

Some touching funeral scenes for the downed heroes, some widows with new baby and folded flags back home and WE'RE DONE. Don't rent this movie. Ok I give this movie 1.5 stars. Not zero only because the actual combat scenes were pretty good as they had NO DIALOGUE. Amateur dialogue simply killed this movie.
- July 10, 2012