WEBCOMICOGRAPHY: THE END OF PARADISE - PAGES 16 TO 20

Our two main characters, Nick Hamilton and Marshall Jackson, are on the road to find Sato Akio to shake him down in order to get the location of their main target, Frankie Paradise. Let's review page sixteen, which is below:


Nick makes a reference to Bronson City, a place where they can hire an extra gun or two to storm Sato Akio's hiding place. Bronson City is a reference to Kalamazoo, Michigan, which was settled by Titus Bronson. The area was known as Bronson, but was named Kalamazoo because legend has it that most of the local settlers hated Titus Bronson. I always crack up when I see the fourth panel for page sixteen. Marshall has made a smart ass response and Nick's reaction is priceless.

I like how Kav used the backgrounds to show Marshall and Nick leaving New Ravenwood, Ohio for the country. Although the last panel has the countryside of Ohio looking more like the countryside of Texas, but it worked for me. Kav also made the nice addition of giving Marshall some shades to add to his coolness. I was born and raised in Ohio, so I had to make a reference to Cincinnati, a town I also refer to as 'The Nasty'.

I had to have a scene with a rest stop because I always use them when I drive from Michigan to visit my family in Ohio. I used the colloquialism of 'pop' to show these guys were from Ohio, and I think it's cool that Kav, who lives in 'soda' country, labeled the machine 'soda'. On a side note, if you live in the Cincinnati area, you say 'grill out' instead of 'cook out'. Now you know. 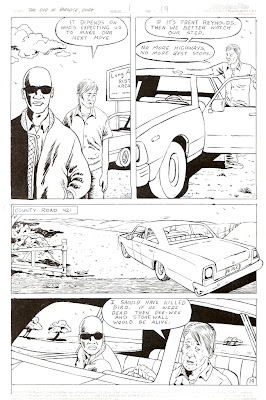 Nick and Marshall's soda pop break is over and they are back on the road. They have decided to take the road less traveled in order to avoid anyone that might be following them, especially one Trent Reynolds. Don't forget about the death of Bird. Keep reading these articles! It is good to see another reference to our beloved dead guys, Pee Wee and Stonewall.

I was watching The Wire on DVD at the time and it inspired the dialogue on page twenty. If you're in the game then you know the risks.

TonyDoug Wright is the owner and editor of Champion City Comics. His webcomics include Dr Death vs The Zombie, The End of Paradise, The Red Devil, and Day 165.
- August 17, 2012