Ladies and gentlemen, we present you another Kav & Tony blog entry for Action Comics #305 titled 'Why Superman Needs A Secret Identity'. 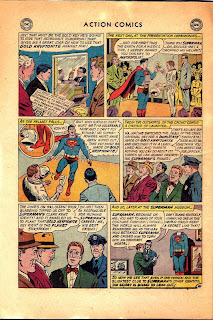 Kav: What's with the elaborate gold key nonsense? Just walk up to Clark and say, 'Here' and hand him the gold key. I find it astounding that Superman didn't even notice when he lost his powers and only found out when someone dropped a helmet on his foot. I would notice if I could hear a gnat cough in China, felt basically no tug of gravity, was really smart, and the next second - well, you know. Why did the crooks even need to know that Clark was Superman in the first place? This whole plan could have been carried out without this info.
Tony: This page fuels my dislike for Superman. You give this guy unlimited powers and yet you make him into a complete buffoon who can't hear three goons plotting his demise in an adjacent room. EPIC FAIL! Also, what astronaut wears their spacesuit and carries around a helmet following their mission? Does gold kryptonite permanently wipe out Superman's powers? If so, then WAKE UP, LUTHOR.
Page 11 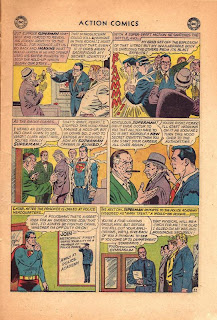 Kav: Couldn't Superman have summoned a robot to deal with this as he has done many times before? Is he wearing a wig because there is no way to bleach his hair?
Tony: We're back to the Benny the Blaster page and Clark decides to take one for the team. Perry tells Superman to get it together, so he joins the police academy. Kav, you're right about bleaching his hair. However, I find it odd that Superman can't grow a 'stache.
Page 12 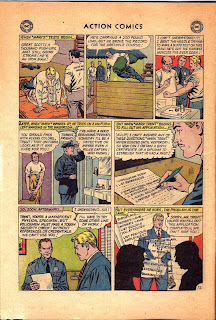 Kav: They just accept without suspecting that he's Superman because NO NEEDLE CAN PENETRATE HIS SKIN? WTF?! Any lowlife criminal can create a fake identity but Superman, with all of the universe's resources past and future along with the Justice League, can not create a fake identity?
Tony: You're preaching to the choir, brother Kav. Also, the genius decides to put on a display of strength that seems impossible for any human being. Way to blend in, dummy.
TO BE CONTINUED!
- August 16, 2011