Kav and I survived the first three pages of Action Comics #283 and are ready to tackle the next three pages of this tale where Supes battles two aliens who explain everything in great detail. Enjoy! 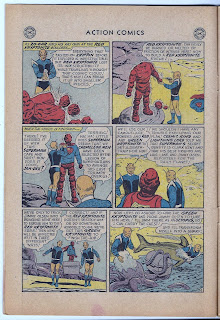 KAV: Of course we're heavy on the xyz letters again-is this some form of racism? Why do aliens automatically have names heavy on the xyz? Here we have Jan-Dex and Zo-Gar. Zo-Gar continues his explanation of every move he makes...this would get real annoying real fast, man. Like everyone in the future, these two miscreants know Superman's secret identity. They're always out for revenge but no one ever just shows footage of Clark changing into Superman-they come up with these elaborate plans that ALWAYS FAIL.

TONY: Are the two chameleon men devising a nasty scheme or are they competing in an old school version of Project Runway? "Make it work". Sorry boys, but guest judge,Truman Capote, said your work was "hideous" and thought you two just draped a stupid ol' costume over some ghastly red rocks. What really bothers me is that these two dopes decided to set up an elaborate trap on some deserted island rather than go directly to the Daily Planet and take out Clark Kent. If these two can travel time then they should be able to find their way around Metropolis. Kav, I agree with you on the xyz issue but I'll add another complaint that these guys report to the Cosmic King and Lightning Lord. Thumbs down on the generic ruler names. 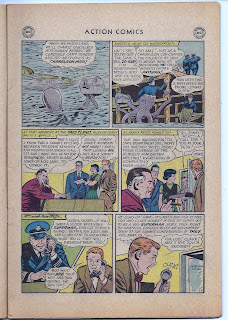 KAV: These guys are so mentally challenged that they have to give themselves instructions EVEN WHEN THEY ARE THINKING? The detailed explaining to the audience of every move is really wearing out any possibility of a plot, boys. Why not just have a page that says "Something happened but Superman defeated the bad guys". That would be just as effective.

TONY: OK, I'm angry. Why did these two morons land on a deserted island, set up a kryptonite catcher, change into sea creatures, turn into cops, walk or ride to Metropolis, and then call Jimmy Olsen? This plot is incredibly absurd. Don't even get me started on the one alien calling Jimmy to take a row boat to an island for a big Superman story. He doesn't give his name, but Jimmy thinks it is a legit lead. Hey stupid, there was a reason Perry didn't want you going to the Kennedy-Khrushchev meeting. 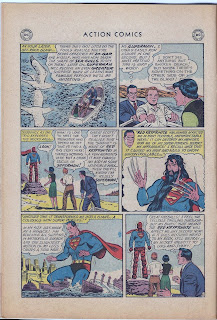 KAV: We have Superman doing what he does best when he's Clark-thinking about what he could do as Superman with that 'If Lois and Jimmy only knew' smirk on his face. Then they see the Red K statue but Lois and Jimmy are too special to realize it's Kryptonite. Yeah, it must be SOME OTHER GLOWING RED METEOR dressed in a Superman suit! Some reporters. Then we have more recap so the readers who don't know about Red K can get brought up to speed. Even though they've been brought up to speed, several times....So we have the guy who can see for light years bumble right up to the effective range of Kryptonite-like he ALWAYS does.

TONY: Looks like Lois and Clark were dumb enough to tag along on Jimmy's mystery lead. Forget the superpower summit, we need to get on a row boat and waste our entire afternoon checking on some silly Superman tip. Again, was it necessary to take a row boat? They could not get a ride on a ferry or possibly rent a boat from the marina?

We are not finished with this story, but we'll return Tuesday, January 24th with more KAV & TONY BREAK IT DOWN!

Need more Kav & Tony? Check out some previous reviews below: