KAV & TONY BREAK IT DOWN: ACTION COMICS #311 'SUPERMAN, KING OF THE EARTH'

Kav and I have returned for our action packed series where we review some of the less-than-memorable comics of the Golden and Silver Age. Get ready folks, we're about to tackle a doozy, Action Comics #311. 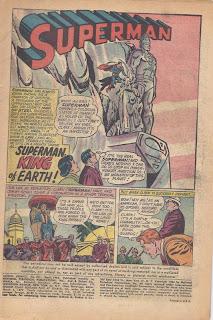 Kav: Lois sees evil Superman carving a giant marble monument and thinks, "Maybe it's an imposter". Yeah, right toots-maybe it's just some doofus in a Superman suit who just happens to be able to fly around and punch off chunks of marble.

Tony: Take that, Michelangelo! A hammer and a chisel? Ha! Superman just karate chops rocks and they magically turn into a work of art. Superman has failed Absolute Monarch 101. A ruler never makes their own statues or palaces. They have slaves build them. I love how Clark and Jimmy visit some 'Minor Tropical Kingdom' and Clark turns into some flag waving hater. This is the time when there was the USA and a million backward countries. 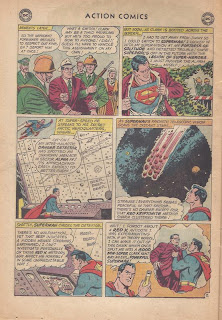 Kav: Superman has to think quickly to slip away and change to handle an emergency because "Supergirl is away in the future". Uh, dumbass she can travel through time so she can go to the future, stay three years, and return one second before she left. It scares me that a dumbass like this has super-powers. So he flies to his fortress and his 'danger detector' spots a flock of Red K meteors. There is so much kryptonite flying around the universe that it seems to be the most abundant element, pushing out hydrogen. Then idiot thinks, "Wait-I forgot about that Red K cure I was working on". Yeah, if I had cancer and was working on a cure, I'd probably forget about it too.

Tony: Look at the goofball army that arrests Clark. They look like a clash of Ben Hur, The Wizard of Oz, and Lawrence of Arabia. Seriously, they have goofy Roman era helmets, bright green suits with ties, and rifles.So Clark was disrespectful just so he could get booted from the country and change into his Superman equipment. Why could he not have said, "Hey Jimmy, I need to take a leak, so why don't you watch the ceremony"? I have no idea why Clark made the thing an international incident. Does he watch Locked Up Abroad? 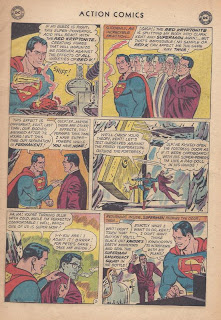 Kav: Genius thinks blithely, "If my guess is right" then exposes himself to an unpredictable Red K/acid mixture. Uh...what if your guess is WRONG and the weird mix changes you into a guy that likes to Push Earth into the sun??? Huh? What then? Then evil Superman splits off and somehow knows the 'rules' of this plot, explaining to Kent how this Red K effect is different. Clark says "Maybe I have super-powers." Hey dummy-do you feel gravity? If so, YOU DO NOT HAVE SUPER POWERS.

Tony: I have a serious problem with this page. The mixture splits Clark into two beings, so the mixture was able to take Superman's power and create another Superman. It's funny to watch evil Superman kick open the door to the fortress and kick Clark to the curb. For someone left in the elements of the arctic, Clark sure holds up well. Many would die of exposure, but then again why use common sense with this comic book. 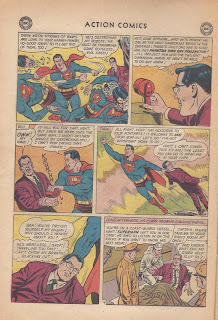 Kav: Evil Superman crushes the phantom zone projector and Clark yells, "OWW!!my hand!" Uh...he's squeezing your WRIST, dude. A reporter should know the difference between a hand and a wrist.

Tony: That phantom zone projector would be best used if Clark could zap guys like Luthor, Brainiac, and Doomsday to the twilight dimension. His life would be much easier. I wonder if Rod Serling lives there. This evil Superman is dumber than Clark and possibly Olsen. What evil ruler of the Earth breaks a guy's wrist and puts him in the care of the Coast Guard? Evil Superman should have tossed Clark into the ocean so he could go on his merry way to carving a giant statue of himself. 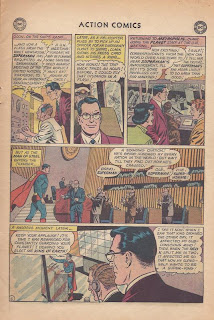 Tony: One moment, Clark is captive on a Coast Guard vessel and later he flashes his credentials and hops a flight to New York City. A menace to society one minute and a hapless reporter the next. Jeez. Superman calls a UN meeting an everyone attends? This is the Cold War era and the USSR and China are like, "Yeah, let's go hear what the American capitalist pig has to say". This is beyond ridiculous.