Yesterday, Kav and I tackled the first five pages of Action Comics 311 and we are not even close to being finished with this comic book. Let's get to business! 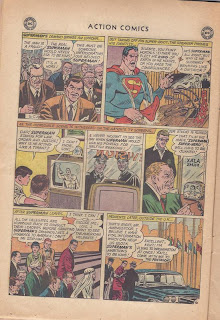 Kav: Superman angrily pounds his SOCK (It's not a boot, I don't care what anyone says) on the podium shouting SILENCE!!! ....I kill you. Then a movie mogul groans that the movie they just made about Superman will have to be scrapped since now he's evil, and his company is RUINED. Hey mogul, since Superman's evil and arrogant, you can just sell the movie to him for propaganda purposes. He can crush as many diamonds as you want to pay you. 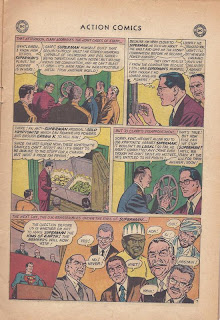 Kav: Good, Clark opens the vault of kryptonite (why they need a vault for this stuff when it falls out of the air like manna is beyond me), but the world leaders refuse to use it. It wouldn't be LEGAL. So let's do the LEGAL thing and let evil Superman take over the earth ILLEGALLY. Christ.

Tony: Why did Superman stockpile a vault full of kryptonite? I understand he does not want it to fall into the hands of Luthor or Brainiac, but wouldn't make more sense to take the kryptonite, put it in a giant crate, and hurl it towards the sun? That's a really lame security proof vault. All it takes is a combination? Well, consider us helpless against this marvel of security. No retina scan?  No DNA sample needed? No voice activated codes? EPIC FAIL. 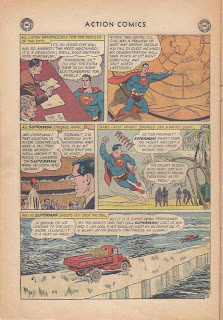 Kav: The man who can vaporize the entire UN is told to 'wait' and they'll vote again tomorrow. Do I have to go into why this is dumb? Readers, you do the math on this one. OK, Superman freezes the desert with his SUPER BREATH. I propose that super-breath is impossible. According to Boyle's law, volume and pressure are inversely proportional. Thus the amount of air Superman can pull into his lungs is based on one thing: lung size. He cannot pull in any more air into his lungs than me or Tony. Even if he can juggle a PLANET.

Tony: This page is absolutely nuts. First, Superman rattles off some longitude and latitude coordinates and some dope stands up and says, "Oh no, that's by my military base". Hey dummy, don't go telling the UN where you keep your bases. Who gives the coordinates of their attack? Evil leaders do these things called SURPRISE ATTACKS. It's a true wonder that ice can not melt in the heat of the Sahara. Also, Superman easily creates another Beringia by defying all scientific logic. 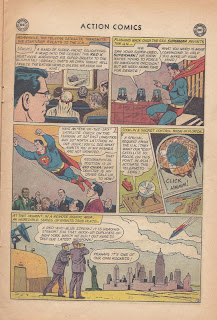 Kav: After his aggressive display, Superman is again told to WAIT by the UN. Remember, he can vaporize them any time he wants and doesn't even really need their permission to do anything.

Tony: Did I just read this page correctly? Did the Chinese create a mock-up of New York City so they can detonate one of their weapons and blow it to bits? Who does something that stupid? They didn't build a mock-up of Tokyo or Berlin when they tested atomic bombs! This is absolute madness.