COMICS FROM THE EDGE #7 - FIRING SQUAD 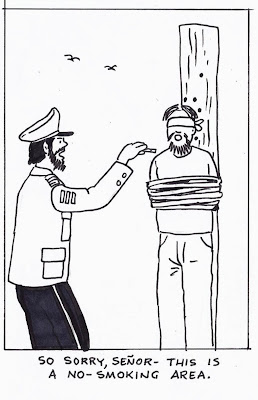 Art by Bob Toben
Ramblings by TonyDoug Wright
We have the typical image of a man tied to a pole waiting for the firing squad to execute him. Generally these guys have cigarettes in their mouths, but not in this panel. Why?
Bob Toben asked me if I had any ideas for Comics from the Edge, so one of my suggestions was to have a smoke-free firing squad. The image of the Mexican firing squad might not be the first thing that comes into your mind for comedic influence, but in my twisted head, it does inspire.
Let's start with my younger days. I was a fan of the TV show You Can't Do That On Television, which was a Canadian sketch comedy program on Nickelodeon starring a bunch of tweens and teens. What is it with Canadians and sketch comedy? Ontario must be one big improv class. Anyway, one of my favorite recurring skits was the Mexican firing squad. For some reason, one of the kids was always placed in front of the firing squad and as the general prepared the firing squad, the kid would talk his or her way out of the execution. Every single time, the general would walk into the line of the firing squad and say, "Fire" and was shot. You won't see that kind of craziness on iCarly. If you never have never seen the skit or need a trip down memory lane, click on the video below and fast-forward to the three minute mark.
When I came up with this comic idea, I was thinking about You Can't Do That on Television but that led to me thinking about The Execution of Maximilian by Edouard Manet, a painting I saw at the National Gallery in London. There are paintings you see that will always stay with you and I thought it was a magnificent piece of art. It's a strange day when Canadian teen sketch comedy and grim paintings by French Impressionists spark your creative side.
I had a comic idea featuring a firing squad, but I needed a humorous line to make it work. A few ideas came to mind, but they were not funny. I was walking around work and noticed that the entire campus was non-smoking. I then thought that it would be humorous if the Mexican firing squad adopted a no-smoking policy.  Bob thought it was funny. We hope you enjoyed it as well. Thanks.
Read Comics from the Edge #6
Read Comics from the Edge #5
Read Comics from the Edge #4
Read Comics from the Edge #3

Read Comics from the Edge #1