Kav and I survived part one  and part two of our series where we have reviewed Action Comics #283. We are going to finish our review today, so get set for some Silver Age nonsense! 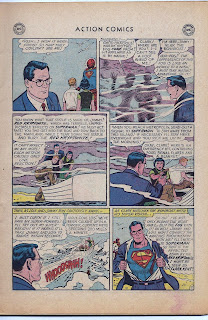 KAV: OK the effect of the Red K is to make any of Superman's wishes come true, which is MAGIC, not science. This is the only time that I know of where Kryptonite had a magical effect, and once again the DC world is blurred by magic and science intermixing. Then he uses his super breath to blow the boat away, but luckily Jimmy and Lois are too dumb to connect the strong burst of wind with the dude standing 20 feet away with his lips pursed.

TONY:  This panel is absolute madness. There is no way that Jimmy and Lois would had survived a gust of wind that would propel them '200 miles a minute'. A minute? Are you kidding me?! The highest wind speed of Hurricane Katrina was an estimated 175 mph. In case you need a bit of help, MPH stands for miles-per-hour. 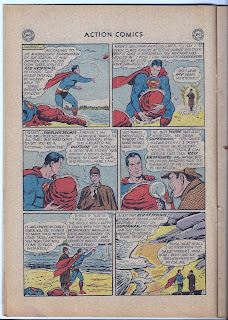 KAV: Sherlock Holmes is created by Superman's wish and is able to determine by the CONTOURS of the Red K's effect on Superman! He also knows he's a storybook character, given brief life by Superman's wish. This fact doesn't seem to upset him though.

TONY: Why is Supes tossing the kryptonite into the water? Shouldn't he destroy it to prevent future problems? Silly me and my rational thinking. I wish I had the energy to rant about a fictional character coming to life programmed with rational thoughts and feelings. *Sigh* 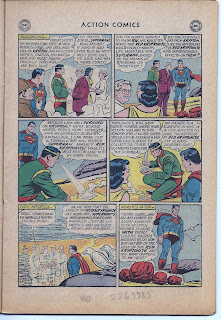 KAV: What??? Jor-El states that he's always wanted to meet Pa Kent. Assuming they never met before as this story does, how the f---- does he even know who Pa Kent is??? OK the effects of the Red K have worn off and Superman bemoans the fact that he can't TEMPORARILY help mankind any longer.

TONY: You'd think that the Chameleon Men would transform into something to stop Jor-El from creating an antidote. Nope, they just sit there and watch everything unfold. Good job, dummies. OK, if Superman wished his parents were there to help then were Ma and Pa Kent the real Kent's or were they figments of Superman's imagination? Also, were Jor-El and Lara the real ones who perished on Krypton or were they also figments of Superman's imagination? Because if he could get Jor-El and Lara back then he would, right? YOU ANGER ME, SILVER AGE COMICS! 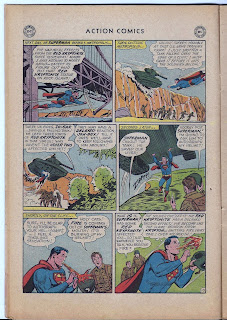 KAV: The soldier sees flames shooting out of Superman's mouth and states, "What is it, Superman? Has some Red Kryptonite affected you so that whenever you talk, you breath fire?" THIS IS THE MOST LOGICAL, COGENT THING ANY SILVER AGE DC CHARACTER HAS EVER UTTERED! KUDOS DUDE!

TONY:  Wouldn't Superman suffer some major facial burns from breathing fire? How messed up would his internal organs be after shooting a ball o'flame out of his big mouth? I loved how he had a 'tingling sensation' when he breathed fire for the first time. This calls for a silly YouTube link. Click here for fun. 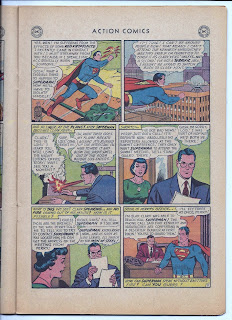 KAV: This page has me speechless. You handle it, Tony.

TONY: I love how Clark destroys the intercom and then uses his Superman powers to get the smoke out of the room. Clark should have gone to college and roomed with some stoners. The second to the last panel was ridiculous. Clark was trying to protect Lois by placing a piece of paper over his mouth so he wouldn't torch his love with a fireball. Nothing protects people from a fireball like a piece of paper. Brilliant! 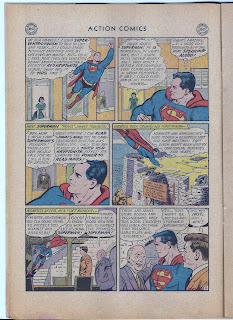 KAV: We learn that Superman used super-ventriloquism...ON HIMSELF! Note to DC: ventriloquists ACTUALLY OPEN THEIR MOUTH SLIGHTLY. It's impossible to utter syllables without air being projected from the mouth! Then Stuporman gets mind reading ability, and of course Lois is thinking what she always thinks when someone reads her mind, about the impossibility of marrying Superman, and the side bet of Clark as spouse.

TONY: Boo on you, DC writers! Ventriloquism? Really?! C'mon, man! What's up with the fort? Were the early settlers of Metropolis defending themselves from Captain Jack Sparrow and The Spanish Armada? You're right Superman, Quimby, I mean Kennedy, and Khrushchev would go to a deserted fort to have a meeting with no security. Thou art a tool, Superman. Also, I love how Khrushchev is suddenly fluent in English, which does not seem to cause any suspicion from Superman. 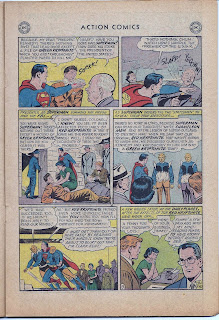 KAV: Man it was awesome watching Supie bitchslap Khruschev! You go, girl! Why do so many Superman tales end with him in the lower right corner as Clark, thinking some ironic thought as Jimmy and Lois stand and sit behind him. I'm serious-this is a VERY COMMON end panel which I just realized.

TONY: Hooray for the last panel! The Chameleon Men surrender without a fight? You've got to be kidding me. Boo on you again, DC writers. What a lame ending. Also, I love how Superman can just fly to the 30th Century and return those two dopes to the authorities. While you're in the 30th Century, could you bring back the cures for all modern diseases? Thanks, pal.

Kav & Tony will return next week with another Superman comic to review. Need more Kav & Tony? Check out some previous reviews below: