Tuesday means it's time for Kav and Tony to break down your favorite Superman comic books. This week, we continue a review of Action Comics #321 'Superman - The Weakest Man in the World'. This was published in 1965 and the writer was Edmond Hamilton, pencils were done by Curt Swan, and the inker was George Klein 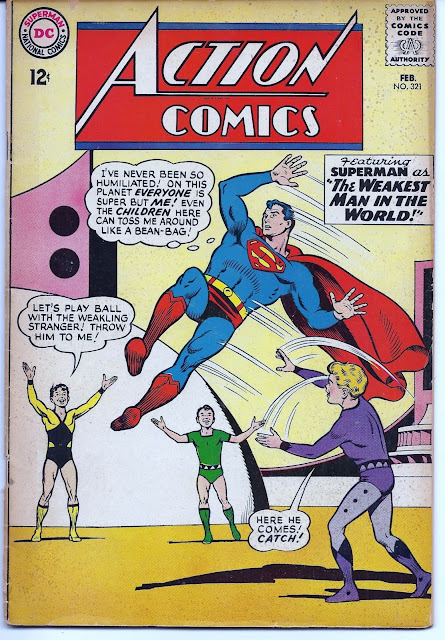 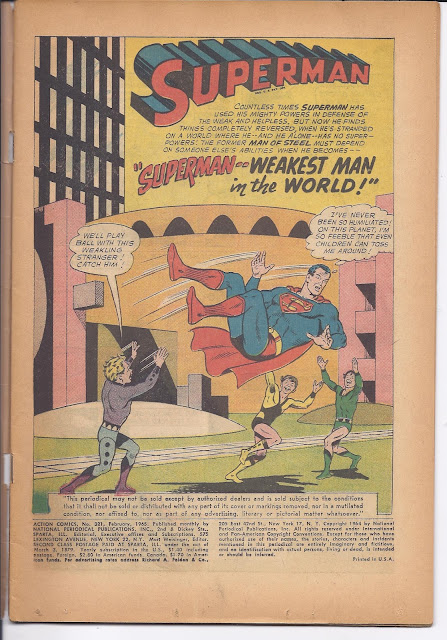 KAV: In this premise splash we see Superman thinking how humiliating it is to be tossed by kids. Why he gets humiliated by the actions of others is odd-I only get humiliated when I do something dumb. He needs to read some Epictetus, man.

TONY: I'm sure the kids in this panel will one day reminisce about the good ol' days when someone could just toss an alien stranger around for fun. 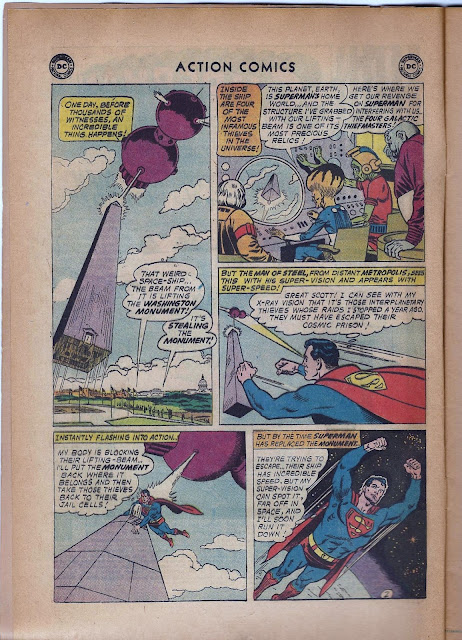 KAV: An onlooker shouts that a weird space ship is lifting the Washington Monument. Another onlooker further clarifies that it is 'stealing the monument'. Must be a schoolteacher. Inside we see a dude with a massive tumor is leading the theft.

TONY: Uh-oh, Kav mentioned a tumor. You know what that means? Click here to find out. It's also nice to know that the Washington Monument can be lifted off the ground and put back into place with no structural damage. 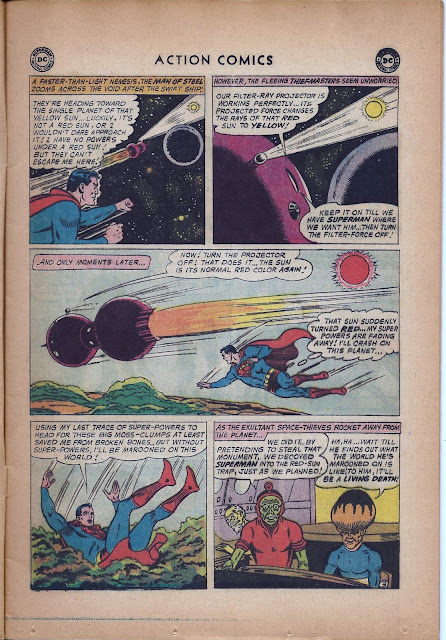 KAV: Thankfully Superman explains to the reader about having no powers under a red sun. DC used to explain every little move like this as if no one had ever read a Superman comic before. And they made no attempt at all to gracefully place such expositional dialogue. So the dudes easily trick Stupidman to a red sun world. They could now easily kill him, but I guess they got distracted by something.

TONY: I'm distracted by the alien thief leader who has Hershey's chocolate sauce on his head. 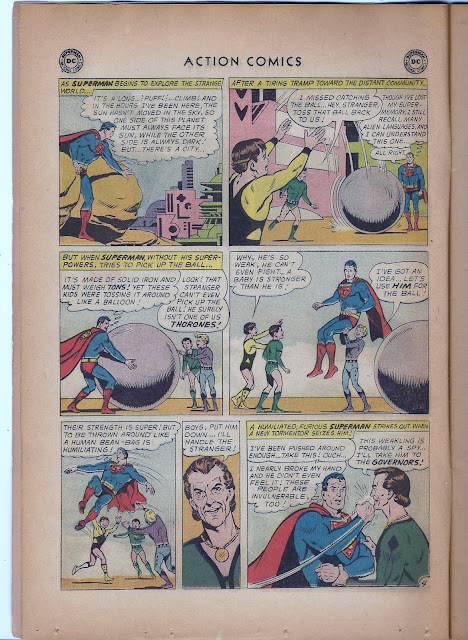 KAV: Superman discovers everyone on this world has superpowers but him. Then he goes to sock some innocent dude who just walked up. Stupid, and childish. And this is earth's hero???

TONY: Hey Superman, if kids are tossing you around like a toy ball then what makes you think that you can punch an adult in the face and knock him out? 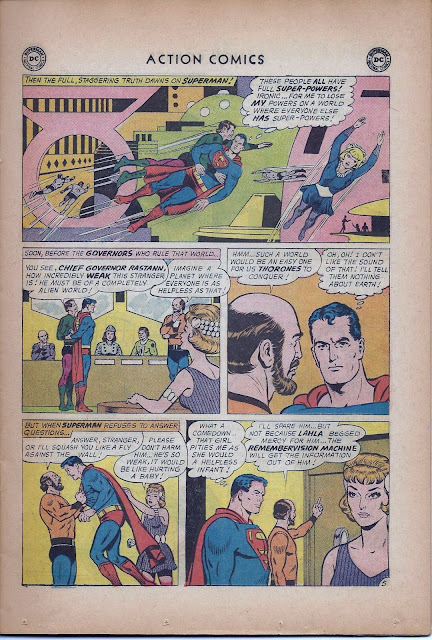 KAV: The dude decides that anyone so weak must be a spy. How he jumped to this conclusion is a mystery. They decide to attack a world filled with weaklings. Apparently they never thought before today of leaving their world-as, in the DC Universe, pretty much every star has an advanced civilization. If I was Superman I would have pointed this out and said, "Hey-why conquer my world when there are PLENTY of closer, richer worlds." I mean, you know.

TONY: Superman is getting harassed by an alien James Lipton? I can't wait to seethe Remembervision Machine. 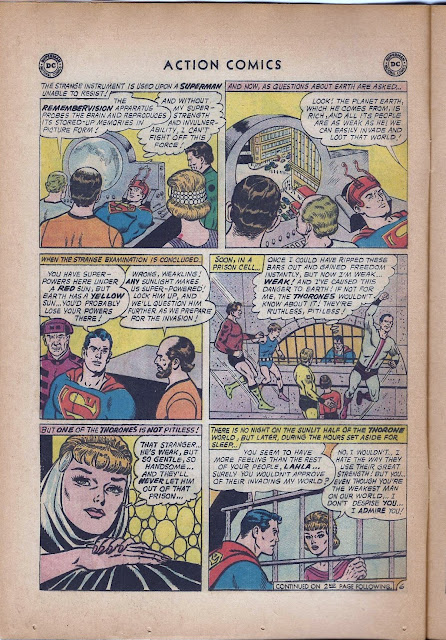 KAV: Of course one guy has to explain to everyone how the Remembervision works-even though everyone already knows. I know people like this. Then La-la land falls for Superman because he's so weak. She must have control issues.

TONY: I was disappointed by James Lipton's Remembervision. Do you remember rock and roll radio? 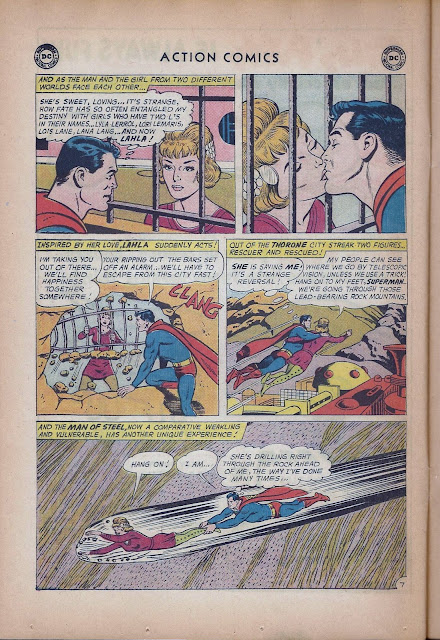 KAV: We have a ridiculous scene here where chick tunnels through rock, with Superman hanging onto her ankles. Need I point out that when you drill through rock, the rock doesn't DISAPPEAR but is pushed BEHIND you, where Stupidman would get chewed into hamburger. Even were this not true, unless she was constantly accelerating, Stupidman would be dragged Texas-style behind her and still get chewed into hamburger. Double burger, man.


OK kids, Kav and Tony will finish this comic next week. Thanks for reading.