Kav and Tony Break it Down is nothing more than two long-time comic book readers making fun of the Golden and Silver Age Superman comics. We understand that these books were written for a juvenile audience but we could not resist reviewing these classics. Please note that no comic books were hurt during the review. 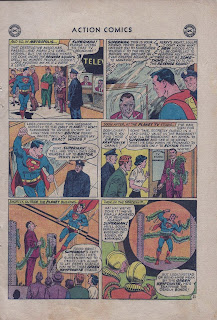 Kav: Superman usually flies around but whenever he's been a bad boy he walks the sidewalk so people can more easily shun him.

Tony: Wow, it's so convenient that Perry keeps green kryptonite chains in a secret vault in the basement. I'm amazed that Clark or Superman never used his X-ray vision to scan the Daily Planet. 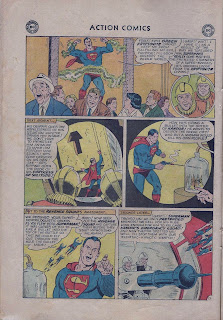 Kav: Superman releases some Kandorians to help him by shooting a hole in the bottle with a bullet...we learn it was all an act him going crazy and as usual he only acted crazy while sending out elaborate super-ventriloquistic orders. Too bad about all the Kandorians now being deaf from the massive explosion the bullet caused in their mini-atmosphere...sad really.

Tony: Wait...what? This is horrible writing. First of all, how does a bullet fired at least a foot or two away from the bottle doesn't cause the bottle to be more damaged than just a tiny hole? Secondly, if Superman has super ventriloquist skills, then how did the people of Kandor hear him and nobody else on earth? STUPID! 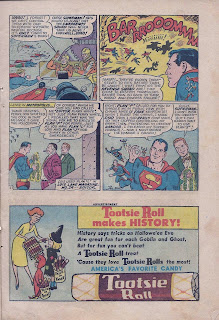 Kav: This is perhaps the dumbest ending ever scripted. We learn that Superman used code words to initiate 'Plan 9 From Outer Space'.."One day, Perry, and I don't know why exactly dude, you will need to shackle me with fake Kryptonite...." Tony? Tony? Are you there? Talk to me Tony!!!


Kav and I will return next week for more tomfoolery.

TonyDoug Wright is the owner and editor of Champion City Comics. His webcomics include Dr Death vs The Zombie, The End of Paradise, and Day 165.
- June 05, 2012

Email ThisBlogThis!Share to TwitterShare to FacebookShare to Pinterest
Labels: Action Comics, DC Comics, Kav and Tony Break it Down, Superman