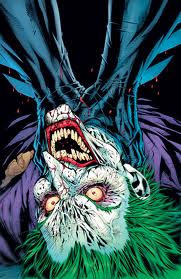 I'm posting some useful advice to up and coming comic book writers about developing villains in their stories. I've got a small bit of advice for today's post and it involves fighting. If you are going to develop a fight scene then PLEASE do not subject us to the fight scene where the villain and the hero trade punches while delivering witty banter..

Watch a MAA fight or a boxing match and count the number of times they stop and trade wisecracks. Did Mike Tyson say anything witty before chewing off a portion of Evander Holyfield's ear? No. It was *CHOMP* and *SPIT*.

I love a good fight scene in comics and I don't mind it when the hero is thinking to himself or herself how he or she needs to suck it up and win the fight against their arch-nemesis. A part of me gets Mike-Tyson-about-to-bite-off-some-fool's-ear angry when a good fight between a hero and villain is filled with too much banter. STOP IT! Talking and fighting do not mix unless you are Muhammad Ali.

Tomorrow's post will be about how the ladies can be villains too!


TonyDoug Wright is the owner and editor of Champion City Comics. His webcomics include Dr Death vs The Zombie, The End of Paradise, The Red Devil, and Day 165.
- February 06, 2013